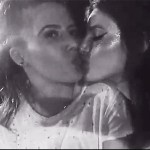 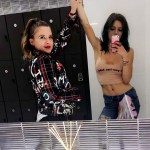 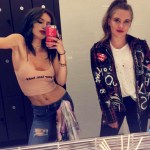 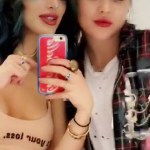 Good grief! Bella Thorne came out as bisexual on Aug. 23, and just hours after her admission, things got really crazy when it was revealed that possible the object of her new love is her brother’s ex-girlfriend Bella Pendergast. Now her fans are freaking out that she dumped Gregg Sulkin to be with the woman she’s been caught kissing.

Bella Thorne, 18, has been having a romance with another woman right in plain view and none of us noticed it. She’s been best pals with Bella Pendergast, 20, since she was 15 when Bella P. was dating Bella T.’s older brother Remy, 20. They’ve always sent each other message of love and friendship, but now that Bella T. has admitted she’s bisexual and is showing off pictures of them passionately kissing, their friendship seems to have blossomed into a full romance. Check out the timeline of the Bellas’ public love fest.

Right around the time that Bella and Gregg Sulkin, 24, announced their shocking split, she posted a birthday message filled with several “I love you” lines to Bella P. This upbeat and caring message came right as Bella T. broke up with her boyfriend of one year, seemingly out of the blue on Aug. 15, and she definitely wasn’t feeling any heartbreak on social media!

Happy birthday to my beautiful babygirl. I'm so proud of the person you have become.. you inspire me to work harder and be smarter. I love you to the moon and back ❤️❤️❤️ @bellapendergast the love you have for animals is the love I have for you❤️ so you can put it in perspective 😙😍 #happybirthday #tbt

She also reposted a photo that Bella P. showed on her Instagram of her beloved horse. Only Bella T. shared it on Twitter calling her “my gorgeous girl,” and Bella P. sent her love right back to her. Hmm….we knew these two were very close pals, but didn’t realize when this was posted Aug. 20 that it might be something bigger than that.

Click here for pics of Bella and Bella’s affectionate relationship

The icing on the cake that there might be more than just friendship going on between the two Bellas came when on Aug. 22, when Bella T. retweeted a message from a fan that showed the pair passionately kissing and wishing the two would date. She was giving us a pretty big hint with the gesture before her official announcement Aug. 23 that she is bisexual, which came two days after she Snapchatted pics of the pair making out.

wake me up when these damn girls will officially date @bellathorne i'm just a happy shipper pic.twitter.com/W0Xp64aXmm