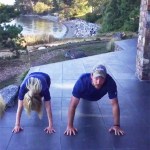 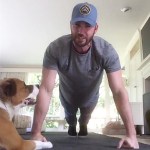 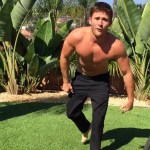 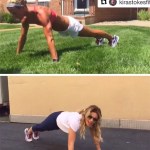 Ow! Ow! Tom Hardy is looking fine doing the #22PushUpChallenge! Despite the insane outfit he’s wearing during the video he made to raise awareness for PTSD, Tom manages to be his ever sexy self. Click here to watch the clip and find out more about the charitable challenge!

Tom Hardy, 38, took on the very important, and very fun, #22PushUpChallenge and the video of him doing it is, well, AMAZING. Tom chose to wear a ridiculous shiny, silver jumpsuit for his challenge and we could not stop laughing while watching him complete it. Of course, the outfit sort of hid his famous muscles, which was kind of a bummer. But we know it was meant to attract even more attention to raise even more awareness for the cause. So we’ll allow it.

Here’s the lowdown on the challenge. If you get tagged by someone, you can choose to either to 22 push ups to raise awareness for veterans who suffer from post traumatic stress disorder, or making a donation to the cause. Or you can totally do both — which would be amazing. The U.K. charity Combat Stress started the challenge, and we have to say it’s gotta be one of the most entertaining and fun ways to raise awareness for a seriously important cause. And watching our fave celebs workout for our enjoyment, while helping people around the world, is pretty fun.

We’ve been waiting for a new charitable trend to take over the internet since the Ice Bucket Challenge, and this August was when the #22PushUpChallenge emerged. Numerous stars have already taken on the challenge, including The Rock, Chris Pratt, Anna Faris, John Krasinski, Kevin Hart,Scott Eastwood, Chris Evans, Candace Cameron-Bure and we are absolutely loving the videos they are posting. We have to give celebs credit for how creative they can get for a good cause! Just check out Tom’s jumpsuit!

HollywoodLifers, would you take on the #22PushUpChallenge? Let us know below!