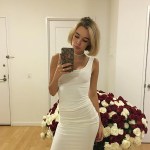 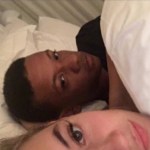 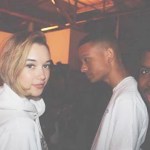 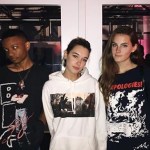 This is absolutely insane. After just over a year of dating, Jaden Smith, 18, and his girlfriend, Sarah Snyder, 21, may be headed on a one-way trip to splitsville. Unfortunately for Jaden, his girlfriend of over a year allegedly cheated on him with a photographer named Gunner who posted a pretty sketchy photo of himself laying in bed with Sarah on Twitter. The worst part? He totally tagged Jaden in the caption. Ouch.

The picture has since been deleted, but according to screen grabs it was posted at 10:16pm on August 1. In the picture, which looks like it may have even been taken by Sarah, she is closest to the camera and covered up by a white comforter. Her shoulder appears completely bare, but Gunner, who is laying beside her furthest from the camera, is wearing a t-shirt. Like we said: totally sketchy.

Since the photo was posted and deleted, Sarah’s verified Instagram profile has gone private. Fans on Twitter are also claiming that Jaden has unfollowed Sarah, though it appears as if he had a habit of unfollowing and following her over and over again throughout their romance. Hmm.

As for Gunner, there are plenty of photos of him and Sarah casually hanging out. His Twitter account (@GUNNERSELLWHITE) says that he’s based in Atlanta, Georgia and he hasn’t turned his account private since the scandal broke out. There are no other tweets on his timeline that include Sarah, though as of July 27 he was tweeting about being in Canada.

Sadly, Jaden and Sarah were just recently pictured together in New York City, and they didn’t seem to be having any troubles. For now, their relationship status remains unknown as this scandal unfolds.

Tell us, HollywoodLifers — Do YOU think that picture of Sarah proves she cheated on Jaden? Comment below1