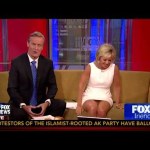 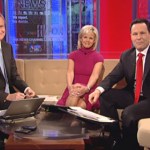 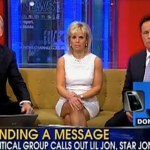 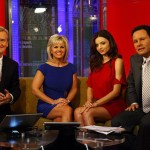 In shocking new legal documents, Gretchen Carlson revealed claims her former co-host Steve Doocy allegedly harassed her during years of working together in a new lawsuit — now the question, who exactly is Steve Doocy?

After hearing Gretchen Carlson, 50, filed a harassment complaint against powerful CEO Roger Ailes, 70, more news followed that included shocking claims that Steve Doocy, 59, supposedly treated her like a ‘blonde female prop.’ Now, we’re filling you in on all things Steve. Here are five things you’ve got to know about the Fox & Friends co-host:

Born Stephen James “Steve” Doocy, October, 19, 1956 in Algona Iowa, the Fox employee grew up in Abilene, Kansas, where he later graduated from the University of Kansas with a BS in journalism. From an on-air radio DJ in college, he went on to anchor the morning newscast on WCBS-TV in New York City, and held a series of broadcast jobs with major networks, before joining Fox News Channel in 1996. Now, he is a series regular co-host for the weekday morning wake-up show, Fox & Friends.

2. He is being accused of ‘persuasive sexual harassment’ by former Fox News host Gretchen Carlson, and here’s exactly what is going on…

Steve “engaged in a pattern and practice of severe and pervasive sexual harassment,” according to Gretchen’s complaint, filed by her lawyers in the Superior Court of New Jersey on July 6, per Politico. Steve’s alleged actions included “mocking [Gretchen] during commercial breaks, shunning her off air, refusing to engage with her on air, belittling her contributions to the show, and generally attempting to put her in her place by refusing to accept and treat her as an intelligent and insightful journalist rather than a blond (sic) female prop.”

3. Steve, a lector at his Roman Catholic church, is currently married and has three children .

The Fox & Friends co-host is a married man, presently residing in Wyckoff, New Jersey. He and his wife, Kathy Gerrity married in 1986 and met when they both worked at WRC-TV in Washington, D.C. They share two daughters and a son; Sally Doocy, Mary Doocy and fellow Fox News reporter, Peter Doocy. Steve is very close with his family according to his Instagram page that is flooded with photos of them. He even posted a family picture June 30, honoring his wife on their 30th wedding anniversary.

4. Steve is an accomplished, bestselling author, who writes about his own experiences with marriage, family and fatherhood…

He has written two books, which happen to be New York Times bestsellers. His first, titled The Mr. and Mrs. Happy Handbook, is about the life of marriage and family. The second, Tales from the Dad Side: Misadventures in Fatherhood, is about, you guessed it…all things fatherhood.

5. Steve and his wife were supposedly the center of divorce rumors at one time.

“There was once a rumor of them [Steve and Kathy] getting a divorce. The story turned out to be fake,” WikiPicky once stated.

HollywoodLifers, keeping checking back as the story surrounding Gretchen’s lawsuit against Steve develops.