Please register to vote and make sure you vote; was a recurring theme of the night. “We really need to pull together and turn this thing around,” Taraji Henson urged the audience, insisting that they don’t want to see Donald Trump land in the White House

That was after the host of the evening, Tracee Ellis Ross, had already pointed out that ‘this election will be determined by single women – welcome to the White House, Hillary Clinton.’ And then Floyd Mayweather found himself mocked by the night’s other co-host, Anthony Anderson thanks to his plan to vote for Donald Trump. During a commercial break. Anderson confronted Mayweather, a known Republican, asking him if he’d be voting for presidential presumptive nominee, Donald Trump, 70.

When Mayweather just laughed in reply, Anderson ribbed, “I don’t know how the hell you got tickets to the show if you’re a Republican.” The audience broke out in laughter.

The audience was sure getting the message Donald, and they rallied especially around Taraji.

Here’s what they had to say: 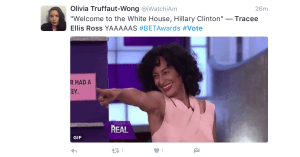 So, here’s the deal, Donald Trump – you haven’t won any friends among the BET Awards crowd, except for Floyd Mayweather.

HollywoodLifers, do you think Taraji, Tracee and Anthony will influence people to vote against Donald Trump and for Hillary Clinton? Let me know.