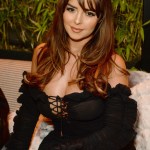 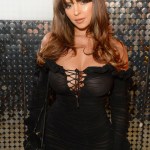 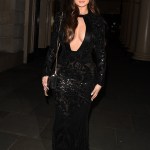 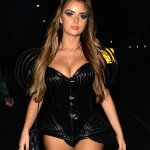 Demi Rose is keeping it low key when it comes to talking about her new relationship with Tyga, but her parents are convinced: it’s true love already! Demi Rose’s parents spilled the beans that things are getting serious!

Mom! Dad! Demi Rose, 21, may have to speak to her parents about giving juicy details about her brand new relationship with Tyga, 26, to Daily Mail. Barrie, 78, and Christine Mawby, 61, confessed to the site that their daughter hasn’t told them much about her new boyfriend, but they can tell that things are already getting serious! Click through for the details!

Barrie and Christine shockingly found out about their young daughter’s new relationship by reading a Daily Mail story itself! They had no idea that Demi Rose was galavanting around Cannes with the rapper, buying YSL purses and clubbing the night away. Barrie has never heard of Tyga before this, which is pretty cute, but from what he’s seen so far, he approves!

“It might be a mutual publicity thing but it would now appear that it’s something more serious,” Demi Rose’s parents told Daily Mail. “Demi hasn’t had a boyfriend since her three-year relationship with a boy she met at Fuerteventura ended three years ago. With regards to Tyga she’ll tell us one of two things, either ‘he’s a nice guy, we’re just friends’ or ‘he’s a nice guy and I like him very much’ — that’s as far as it goes.”

Barrie and Christine are totally supportive of Demi Rose in everything she does. The Kylie Jenner look-alike is an accomplished lingerie model, and they think she’s so good at what she does!

“We don’t mind [her nude photos] all,” Demi Rose’s parents said. “She always said she wouldn’t do nudity not that we’ve told her not to, her pictures are racy and suggestive but she shows them all to us. We’re right behind her. She’s such a beautiful girl, why shouldn’t she? If you’ve got it, flaunt it.”

HollywoodLifers, are you shocked that things might already be getting serious between Demi Rose and Tyga? Tell us in the comments!