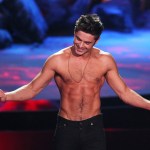 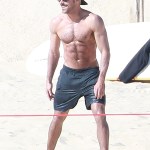 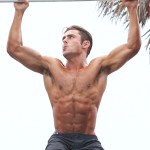 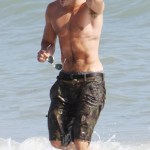 In the words of ‘Full House’s Uncle Jesse, have mercy! Things have been getting super steamy on the set of ‘Baywatch,’ as Zac Efron was recently pictured shirtless and showing off his ripped muscles. He even engaged in a romantic scene with his sexy co-star. See the pics here!

Brace yourselves because you’re going to need a cold shower after looking at these new pics of Zac Efron, 28. The hunky star recently showed off his rock hard abs on the set of his new movie, Baywatch, and we definitely like what we see. We want more!

Zac, who plays Matt Brody in the film adaptation of the hit ’90s TV series, was spotted filming an intimate scene with co-star Alexandra Daddario, who plays Summer Quinn, PEOPLE reports. In pictures posted on the news site, it looks as though Zac and Alexandra were preparing for a big kiss.

The film also stars Dwayne “The Rock” Johnson and David Hasselhoff. And speaking of Dwayne, he and Zac participated in a tire flipping race, as evidenced by two Instagram posts they each shared on March 6. “‘Blood, sweat and respect. The first two you give, the last one you earn.’ Learned that from @therock who I happened to get in a tire flipping race with on #Baywatch. Needless to say I lost this one – come at me on the 50 yard dash and we’ll see what happens, Sasquatch ;),” Zac captioned his pic. Dwayne also captioned his pic and commented on “the insane shape” Zac got in for the movie. Insane is a total understatement if you ask us. Just look at those abs! See more pics in the gallery above.

Production for the day has ended, all the extras are going home and the sun's going down. Me and @zacefron refuse to quit in a tire shrugging contest that lasted for hours. Why? Because we're #BAYWATCH, we're bad ass and we're a slightly dysfunctional family. ✔️ On a side discipline note juuuuuust wait til you see the insane shape my boy Efron got in for our movie. Proud of the hard work he put in. That's the way you make a character "Iconic". I still kicked his candy ass though in this contest. #OnSet #TwoMeatheadsActingLike12YearOlds #EpicFunThough #BAYWATCH SUMMER 2017 🌊💪🏾

What do YOU think, HollywoodLifers? Are you excited for the Baywatch movie? Should Zac keep his shirt off more often? Tell us below!