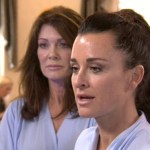 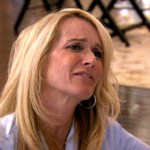 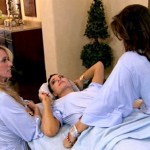 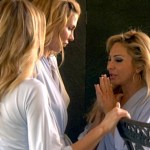 Well, Erika Girardi finally admitted she was the one who told Yolanda that Lisa Vanderpump and Kyle Richards questioned whether her kids really have lyme disease. Hallelujah! But that, unfortunately, didn’t fix everything. Yolanda then confronted Lisa Rinna about her munchausen accusation.

The Feb. 16 episode of The Real Housewives of Beverly Hills was intense! Not only did emotions run high when Kyle‘s sister Kim was brought up in conversation, but the whole munchausen accusation situation was finally dealt with and the result wasn’t pretty.

While having brunch at Kathryn and Donnie‘s San Diego home, Kim Richards was brought into conversation after someone questioned if Lisa Rinna was ever accused of having an eating disorder. Of course, she brought up the epic fight that happened in Germany — when Kim smashed her wine glass on the table and told Lisa to eat some bread — and from there, the conversation spiraled into talk of addiction. Kyle felt super uncomfortable, so she left the room. But Kathryn took it as an opportunity to reveal that her dad committed suicide when she was just 13, and he, too, was an addict. So she was actually defending Kim, even though she wasn’t in Germany during the epic quarrel.

It was also during this brunch that Erika finally admitted to having a conversation with Yolanda and throwing Lisa Vanderpump and Kyle under the bus.

Later, while attending a carnival-themed party at Erika’s, the ladies sat down for an open chat about munchausen, or as Yolanda likes to call it, mousin-something. (Personally, we feel she just liked to keep saying it wrong on purpose.) Anyway, Yolanda told Lisa Rinna that saying sorry wasn’t going to cut it and she was deeply hurt that she was even accused of having munchausen syndrome. Lisa Rinna swore that she was just the messenger and not the person who initially brought it up, so Erika demanded she reveal the culprit. Sadly, Lisa Rinna didn’t feel comfortable revealing the person’s name when they weren’t present, but we’re dying to know who it was! Eventually, the ladies convinced Yolanda that they all support her and just want to see her get well. Lisa Rinna and Yolanda then hugged it out, but we’re not so sure their friendship has been fully repaired.

What do YOU think, HollywoodLifers? Are you tired of hearing about Yolanda’s lyme disease? Are you glad she confronted Lisa Rinna? And how bad do you want to know who first mentioned munchausen? Tell us below!