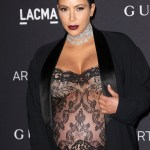 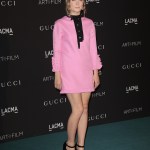 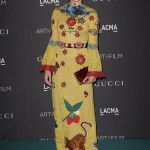 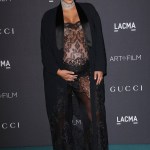 WHOA! Kim Kardashian showed off a lot of skin, including her bare pregnant belly, on Nov. 7 at the LACMA Gala. The expectant mom stole the show with her sheer jumpsuit!

Kim Kardashian, 35, is in the last stages of her second pregnancy, and she’s fully embracing her baby bump. The reality star bared her baby belly in a sexy lacy jumpsuit at the LACMA Film + Art Gala on Nov. 7 in Los Angeles. The barely there outfit is the closest Kim’s gotten to posing nude since her epic pregnancy selfie in Aug. 2015!

Kim is no stranger to showing off lots of skin, and she made certain all eyes would be on her at the LACMA Gala when she stepped out in her sexiest maternity outfit to date. The sheer jumpsuit was almost entirely see through from head to toe, except for a few choice places. All the attention was on Kim’s 8-month pregnant belly, and she had her hand placed tenderly on her stomach the entire time.

To prevent a wardrobe malfunction, Kim wore a nude bra underneath the sheer jumpsuit. Her cleavage was on full display as well. She also wore a long black blazer with the outfit. Kim rocked the vampy look, complete with dark red lipstick and a sparkling choker.

Kim also bared her baby bump in Sept. 2015 at the Givenchy New York Fashion Week show. The black lace gown showed off her growing baby bump for all to see. There’s no look Kim can’t rock!

Just one day before the LACMA Gala, Kim helped mom Kris Jenner celebrate her 60th birthday with a lavish $2 million Great Gatsby-themed party. Kim and her sisters dressed up in gorgeous 1920s style outfits. Kim stunned in a breathtaking gown with feather detailing. Her pregnancy glow was undeniable! The Kardashian and Jenner sisters surprised the momager with an epic birthday tribute by recreating Kris’ 1985 “I Love My Friends” music video.

HollywoodLifers, what do you think of Kim’s latest maternity look? Are you a fan of the sheer jumpsuit? Let us know!