The hacker first took aim at Marlene’s comments from New York Comic-Con about flashbacks being “interpretive.” Marlene said that when we see flashbacks that characters could be seeing themselves in the present day. The hacker didn’t seem to like Marlene’s explanation. See the biggest disses below.

Later, the hacker went on to say that Marlene shouldn’t have had such an easy password to guess. Ugh, rude! Then the hacker posted a photo of Ashley Benson and wrote, “Now back to this b**ch who thought CeCe would make sense, Marlene what’s good?”

The hacker continued to rudely blast Marlene for her Pretty Little Liars storylines and finished off with, “Even Sara wanted Wren to be A… That says a lot. Lmao the finale literally didn’t make sense their was no sense to it. And how are you supposed to feel sorry for person that tortued 6 girls? No bruh no.” 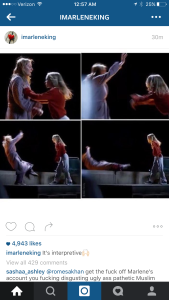 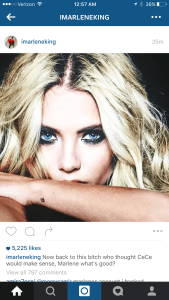 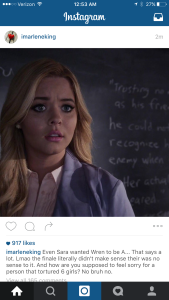 The photos and messages were later deleted, and Marlene wrote a message to her fans: “Hacked. But it’s me now. Thanks to all of you who sent me nice comments. I know you have my back and I appreciate it.”

We love you, Marlene! You should NEVER have to explain your storylines. Just shake off the haters!

HollywoodLifers, what do you think of Marlene’s Instagram hacker? Let us know!

Related: ‘PLL: Original Sin’ Reveals The Identity Of ‘A’ In A Shocking Finale Twist