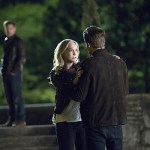 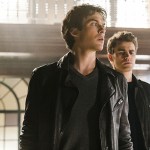 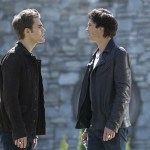 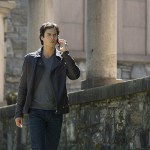 Vicki Donovan is a married woman! ‘Vampire Diaries’ star Kayla Ewell got hitched to her longtime boyfriend, Tanner Novlan, on Sept. 12 in Los Angeles, California. Get all the details on the special ceremony below!

Congratulations, Kayla Ewell and Tanner Novlan! Kayla, 30, also known as Vicki Donovan on The Vampire Diaries, wed her boyfriend of nearly five years on Sept. 12 and celebrated with 200 of their closest family and friends. Of course, this family-and-friends affair included some of the Vampire Diaries crew — keep reading to find out who!

Kayla and Tanner tied the knot at Los Angeles’ Jonathan Club, which is a place close to Kayla’s heart. She told People the venue was a “no brainer” because of the amount of family time she has spent there. The outlet got the full scoop on the couple’s meaningful ceremony, which was officiated by Kayla’s uncle, as well as the celebration afterward!

To make the day even more exciting (and star-studded!), Kayla’s former TVD co-stars Nina Dobrev, Michael Trevino, Sara Canning, and Zach Roerig joined in the wedding festivities. Candice Accola was even one of the six bridesmaids! Wow, we so would have loved to be there!

“They’re really special,” Kayla told People of her Vampire Diaries family, prior to her big day. “It’s been really fun, and it means a lot that they’re all coming.”

The magazine gave us an inside look at the wedding’s amazing setting as well as the happy bride and groom. There’s no denying that Kayla, who looked beautiful in a Monique Lhuillhier gown, and Tanner were ecstatic to be marrying each other!

“We started as friends and we just continue to grow,” Tanner gushed. “I’m just really excited to grow now into marriage. She’s an awesome, positive light and the complete package.” As if that isn’t adorable enough, Kayla added, “Whatever happens, we can take it. We’ve got each other!”

Could these newlyweds be any cuter together? We certainly don’t think so! We are beyond happy for Kayla and Tanner as they start their forever as Mr. & Mrs. Novlan!

HollywoodLifers, are YOU excited for Kayla and Tanner? Send your congratulations to the couple below!