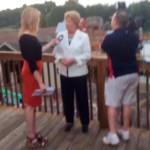 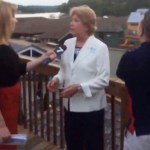 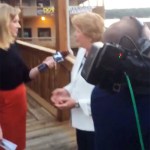 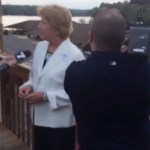 The gunman who allegedly shot and killed Alison Parker and Adam Ward on live television has also allegedly shot himself. Vester Flanagan, also known as Bryce Williams, is reportedly in critical condition after allegedly shooting himself in the head as Virginia authorities were finally able to confront him.

Vester Flanagan, 41, has allegedly shot himself on Highway I66 in Virginia just hours after he allegedly fatally shot and killed reporter Alison Parker, 24, and cameraman Adam Ward, 27, on live television. A third victim, Vicki Gardner, was also shot, but survived the initial attack and is now reportedly in surgery to save her life.

It’s over. Multiple reports claim that the alleged gunman, Vester Flanagan, has been caught after allegedly shooting himself, reports CNN. There was some confusion about whether or not Vester survived the alleged self-inflicted gunshot wound, as it was originally reported that he was dead. Now, Vester is being reported as having a very faint pulse and being in critical condition after allegedly shooting himself in the head on Highway I-66.

“The man suspected of killing two WDBJ7 employees Wednesday morning killed himself on I-66 in Faquier County, according to state police,” WDBJ7 originally reported, claiming that Vester, also known as Bryce Williams, was dead. As you see above, it has been confirmed by Virignia State Police that Vester is still alive.

During his rampage, the gunman, dressed in all black, approached Alison, Adam, and Vicki from behind as they were broadcasting live on WDBJ7. In the graphic video, which you can watch above at your own discretion, Alison is interviewing Vicki, the Executive Director of the Chamber of Commerce, as Adam holds the camera. Suddenly, at least 8 gunshots ring out, and you see both Alison and Vicki try to escape as the camera slowly hits the floor.

One very eerie screen shot from the video revealed a blurry image of the shooter, wearing a black hoodie and pointing his gun directly at Adam and the camera as they both lay on the floor. It’s very chilling to watch and again we only advise you viewing the video at your own discretion.

Our thoughts remain with the family and friends of Alison, Adam, and Vicki during this extremely difficult time.