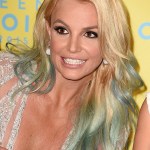 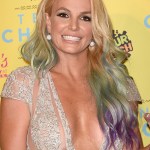 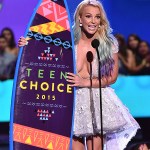 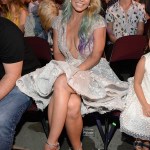 Well, that was a bit uncomfortable. Former lovers, Nina Dobrev and Ian Somerhalder, won the award for Choice TV: Liplock at the Aug. 16 Teen Choice Awards, thanks to loyal fans of ‘The Vampire Diaries,’ who think they’re the best kissing partners on TV.

They may have broken up off-screen in 2013, but Nina Dobrev, 26, and Ian Somerhalder, 36, have been lovers on The Vampire Diaries for quite some time. And their fans love to see them kiss, as evidenced by the duo winning Choice TV: Liplock at the 2015 Teen Choice Awards on Aug. 16. It was exciting, but we can’t ignore the fact that the win was totally awkward.

Nina actually went on stage to accept the award for Choice TV Actress: Sci-Fi/Fantasy for her role as Elena Gilbert in The Vampire Diaries. But as she was walking up on stage, the narrator announced her other wins for the night, including Choice TV: Liplock with Ian.

Nina and Ian were up against some steep competition — Candice Accola with Paul Wesley (The Vampire Diaries), Jennifer Morrison with Colin O’Donoghue (Once Upon A Time), Candice Patton with Grant Gustin (The Flash), Emily Bett Rickards with Stephen Amell (Arrow) and Gina Rodriguez with Justin Baldoni (Jane The Virgin) — but Delena fans proved their a force to be reckoned with.

We would have loved to see Nina and Ian accept the award together — we’re huge Delena fans — but we can understand why he bowed this one out. Not only would it have been a bit awkward to accept an award for being great lovers, but it probably would have been weird for Ian’s wife, Nikki Reed, and Nina’s new boyfriend, Austin Stowell. Either way, we’re glad they won and Nina looked amazing.

What do YOU think, HollywoodLifers? Are you happy Nina Dobrev and Ian Somerhalder took home the award for Choice TV: Liplock? Vote in our poll and tell us how you feel!