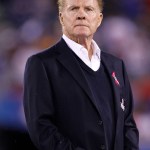 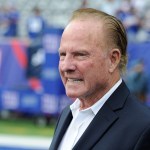 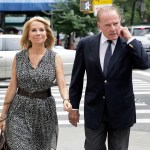 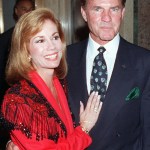 So heartbreaking. Kathie Lee Gifford’s husband, Frank Gifford, has sadly passed away. The famed sportscaster and former NFL player died on Aug. 9 at the age of 84. He will be missed.

Frank Gifford, renowned sportscaster and NFL legend, died suddenly on Aug. 9 at his Connecticut home. Frank, who was married to TODAY show co-host Kathie Lee Gifford, 61, was 84 years old. He played for the New York Giants before transitioning into a successful career in sports broadcasting. Frank was just one week shy of his 85th birthday.

Frank’s death was confirmed to NBC News with this statement: “It is with the deepest sadness that we announce the sudden passing of our beloved husband, father and friend, Frank Gifford. Frank died suddenly this beautiful Sunday morning of natural causes at his Connecticut home. We rejoice in the extraordinary life he was privileged to live, and we feel grateful and blessed to have been loved by such an amazing human being. We ask that our privacy be respected at this difficult time and we thank you for your prayers.”

Frank had a long and distinguished career in sports. He played for the New York Giants from 1952 to 1964 as a running back, wide receiver and defensive back. The team had several visits to the Pro Bowl during his time as a Giant. He suffered a head injury in 1960, causing him to sit out the 1961 season. He returned in 1962 before retiring for good in 1964. Frank was inducted into the Pro Football Hall of Fame in 1977.

Frank married his USC college sweetheart, Maxine Avis Ewart, in 1952. They had three children together — Jeff, Kyle and Victoria. Frank married Astrid Lindley in 1978. They divorced in 1986. He then married Kathie Lee, whom he shares a birthday with, in 1986. The couple was married up until his death, and they have two children — Cassidy and Cody — together. Kathie Lee frequently talked about her beloved husband on the TODAY show.

UPDATE: Kathie Lee has spoken out about Frank’s death.

Our thoughts and prayers go out to Frank’s family and friends during this time.