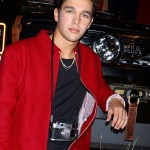 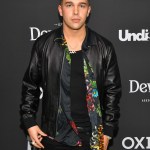 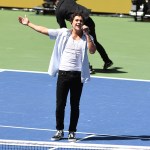 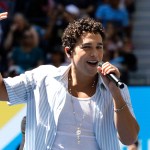 Listen up Mahomies! Austin Mahone just released the brand new video for his single ‘Dirty Work,’ and in it, he pays homage to ‘The Office’ with an EPIC dance party. Check out his ‘freaky’ new dance moves (and super hot makeout session) here!

There’s a new girl in Austin Mahone’s, 19, life! The pop heartthrob premiered his brand new video for the single “Dirty Work” on July 27, and in it, he pays homage to the TV series The Office, turning a boring day at work into a full-on party complete with sexy dance moves and a whole lot of flirting.  Close your eyes Becky G, 18 — you’re not going to like this one!

The 19-year-old singer is giving a whole new meaning to the phrase “Dirty Work” with the release of the single’s hilarious music video.  Taking its inspiration from the popular TV series, The Office, the video sees Austin and his ‘co-workers’ combating a boring day at work by throwing an epic dance party in hopes of impressing the sexy new girl.  What unfolds is a series of seductive dance moves, funky beats, and oh yeah, a little office romance.

“We were like, let’s make a video where we are all stuck in an office, and we are all super bored and our boss keeps us over, and then he leaves and we have a huge party in the office,” Austin told MTV about the video’s concept. “It’s me and my coworkers, and we are running around and dancing and then there is this new girl that comes in, and I’m showing her around, and we like each other a little bit, and we are getting a little freaky in the boss’s office.”

That’s right — Austin takes full advantage of his boss being out of the office, namely using the occasion to get hot and heavy with the new girl.  But what does the singer’s real-life girlfriend think of all this?  Turns out, Becky G hasn’t actually seen the video (yet), but he’s sure “he’ll hear about it” when the time comes.  “When we were shooting that part, it was real sexy, real intimate and then it was hard to get into the mood with ’Dirty Work’ playing,” said Austin. “So they are like, ’cut, cut, cut, we are going to try this again, but I’m going to throw you a curve ball.’ And so they did it again and played this super sexy R&B song that was crazy, and so that made that shot a lot better.” Much like the famed TV series, the video is cut with interviews of Austin’s coworkers dishing on all the action — the girls talk trash about the new girl, while the guys keep trying to make a move on her. But seriously, who could resist Austin and his sweet dance moves?

Off screen, Austin and Becky are a few months into their relationship and appear to be going strong. “We’re dating,” he gushed in April. “I’ve never had, like, a real relationship before so it’s pretty crazy.” Seriously, those two are just the cutest together. Austin even joined his lady in his her video for “Lovin’ So Hard,” and they packed on the PDA for their romantic scenes. Obsessed!

HollywoodLifers, what do you think of Austin’s new music video!? Will you be picking up his new album when it comes out? Let us know in the comments below!