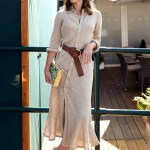 Emma Watson is safe and accounted for! Apparently there was a kidnapping plan floating around with the actress as the target of the scary crime. Emma was reportedly being eyed by the very people she was working with on the set of ‘Beauty and the Beast.’

No, we’re not talking about the plot of Beauty and the Beast gone wrong. Emma Watson, 25, was supposedly the subject of a possible kidnapping after reports of the horrible plan were revealed to staff members working on the set of Beauty and the Beast. As scary as that all sounds, was Emma’s life really in danger or was it all just a hoax?

The story of plans to kidnap Emma on the London set of the Disney film were totally false. “The story was looked into by production and found to be unsubstantiated and untrue,” a spokesperson said regarding the scary matter. Thankfully it wasn’t true at all and Emma’s life isn’t in danger. The 25-year-old actress is currently safe and sound across the pond working on the highly anticipated live-action Disney flick!

The original story reported by The Sun, said that two studio workers had discussed plans for either kidnapping the Harry Potter star or stealing from her in a taxi ride. The employees were said to have spoken in a different language and they were unaware the driver understood every word they said. Upon hearing the plan, the driver reported it to his superiors and they alerted the studio staff of the matter. While this story is completely false, it’s not the first time the actress received scary threats about her well-being.

Emma Watson Confronted By Stalker On The Set Of ‘Noah’

Back in 2011, Emma came face to face with a stalker while she was filming the movie Noah in Long Island. In the middle of the woods, the actress was approached by a man who she recognized from hanging around her home. Her surprised scream caused the film’s security to capture and remove him from the premises. That’s a scary situation to be in.

What do you think, HollywoodLifers? The story was false, but should Emma increase security just in case?