The episode picked up right where we left off last week, and, yes, Ian was still being a total douchebag. He went off on this stupid rant about how Kaitlyn’s a “surface level person,” and he was on the show to find a wife. Blah, blah, blah. “I’m not looking to plow your field. I’m looking for a deeper connection,” he said. Needless to say, Kaitlyn was PISSED.

She called him out for being rude and offensive. He admitted that he knew he was going home, and she didn’t fight him on it. Bye. Good riddance, Ian. As he rode away in the obligatory limo ride, he said that he’s too much of a “deep thinker” and “self-aware” for Kaitlyn. “I’m being punished for being an intellectual,” he said. Dude, GTFO. Ian even went so far as to say he has what it takes to be the next Bachelor. Jesus. Someone call a medic. This guy is clearly delusional.

At this point in the episode, the boys were freaking out. No one was sure what was going on. Nick Viall was the first guy to talk to her after Ian left. He revealed that he talked to Ian the day before, and he was sketchy then. Nick made Kaitlyn feel better pretty much instantly. He said that having a “deep” conversation all the time was lame. The guy has a point. Ian has absolutely no chill. Sometimes a girl just wants to goof off.

The guys started getting pissed off that Nick was taking up all the time, especially since he already had a rose. Joshua really wanted to talk to Kaitlyn. Meanwhile, Shawn told Ben H., who may or may not be Stephen Colletti’s doppelgänger, about how much he’s been opening up to Kaitlyn. He decided to be proactive and go find her. He ended up walking in on Nick and Kaitlyn making out.

Poor Shawn. Just like any normal human being with feelings for another, he gets jealous every time he sees Kaitlyn with another guy. He stormed off into another room. So. Much. Drama.

‘The Bachelorette’: Off To Dublin

Kaitlyn finally told the guys about Ian. She was in the middle of her conversation when Chris Harrison walked in. The rose ceremony was still a go, and everyone got scared. They all headed to the Alamo. Kaitlyn confessed to Chris that she was nervous. Some of the boys were falling in love with her and feelings were on the line. Keeping with her honesty policy, she admitted to the guys that she’s falling in love. Along with Shawn and Nick, Jared, Cupcake, JJ, Joe and Ben Z. were safe. The last rose went to Tanner, which left Joshua and Justin rose-less.

Related: Zach Shallcross: 5 Things To Know About Star Of ‘The Bachelor’ Season 27

But guess what? They were headed to Dublin and more roses were going to be handed out. “I want this rose so bad I would pull my own tooth out for it,” Cupcake said. With or without meds, dude? The guys all made it there safe and sound. Everyone was pumped. Unfortunately, Kaitlyn announced that Nick got the first one-on-one date. Sigh. Shawn was pissed. (I feel you, Shawn B. I feel you.)

Nick and Kaitlyn’s date started pretty much right after they settled into Dublin. “I wore a holey sweater so you can touch my back,” Kaitlyn told Nick. Okay, then… We learned that Kaitlyn’s terrified of birds, and the pair ended up Irish dancing in the middle of the street. Nick bought Kaitlyn a ring. She was “instantly happy” to have that ring sitting on her ring finger. Uh oh. They started making out on the side of a wall. Yep, Kaitlyn drank the Nick kool-aid.

Back at the guys’ place, the date card had arrived. This was Shawn’s reaction: 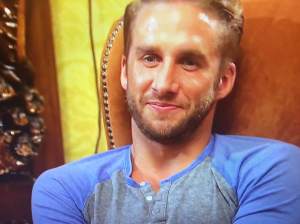 Tanner, Ben Z., Shawn, Chris  and Ben H. all got named. JJ and Joe were left hanging, but at least they would get a two-on-one! Meanwhile, Nick and Kaitlyn had dinner inside a cathedral. “I really like Nick,” Caitlyn said. “I believe him. I trust him.” They started making out in church. No big deal.

“Nick just makes me feel like a woman,” Kaitlyn continued. “A desired woman.” Obviously, she gave him a rose and asked him to go back to her hotel to “hang out.” Kaitlyn, DON’T DO IT. The second they walked through the door, they started kissing. “Come with me,” she purred. She led him into her room and shut the door. Moaning sounds were heard. It was pretty nuts. The next day, Nick walked out of the room looking smug. Kaitlyn seemed pleased.

She wasn’t feeling guilty about the act itself, but she was feeling guilty because of the feelings she had in her other relationships. She was petrified Nick would tell the other guys about their tryst. He was doing a good job of not doing it until Shawn walked in. Then he began going on and on about how his date with Kaitlyn was “intimate” and “personal.” Prick. See below for a look at Shawn’s agony during this moment: 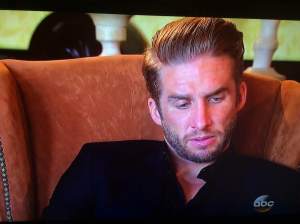 ‘The Bachelorette’: A ‘Stupid F–king Mistake’

To make matters worse, Kaitlyn was dead — for the group date. The date was an Irish wake. Yeah, the guys weren’t feeling it. When they walking into the BAR, Kaitlyn was lying in a coffin. The boys had to give eulogies about Kaitlyn. The best send-offs were Ben Z. and Shawn. Ben Z.’s was very emotional and sweet, while Shawn’s was a straight-up diss. He said Kaitlyn killed herself because she had to spend the day with Nick.

At the afterparty, Ben Z. and Jared had some cute one-on-one time with Kaitlyn. When Shawn got his turn, he showed Kaitlyn pictures of his family. (I’m pretty sure his dad was Calvin Harris.) He felt confident that he would get the next rose. Nope, it went to Jared. They had an adorable little date where they danced to The Cranberries.

Shawn was mad — again. I’ll be honest and say I’m a Shawn fan, but he was a tool at the end of the episode. He said there was no way Kaitlyn could have more feelings for Jared than for him. He wasn’t handling the whole concept of Kaitlyn dating other guys very well at all. “I can’t handle it anymore,” Shawn said, before going up to her room. (PS: Nick defended her for sleeping with him afterward on Twitter.)

That’s when the guilt started weighing on Kaitlyn big time. She was scared he was going to talk to her about Nick. She didn’t want a “stupid f–king mistake” getting in the way of what she had with Shawn or the other guys. The episode ended before we got to see what happened next. Will Kaitlyn come clean?! To hear more about the Bachelorette, head over to iTunes to download the new HollywoodLife podcast for free!

HollywoodLifers, what did you think of tonight’s Bachelorette? Are you shocked she had sex with Nick?