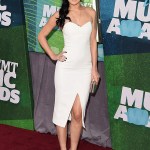 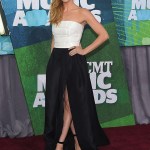 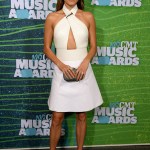 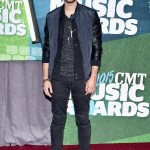 Talk about stealing the spotlight! Nikki Reed and Ian Somerhalder may not be country stars, but the newlyweds have never looked better walking down the red carpet at the 2015 CMT Music Awards!

Stop being so perfect, you two! Ian Somerhalder, 36, and Nikki Reed, 27, walked their first award show red carpet as Mr. and Mrs. on June 10 at the 2015 CMT Awards, and looked so adorable. Ian went with a basic, classy tuxedo while Nikki chose a shirt, white dress with cutouts — and it’s safe to say, white was the early trend of the night!

Nikki returned to “one of her favorite places,” Nashville, Tennessee for the red carpet before the award show, where she was set to present the CMT Award to Male Video of the Year. Of course, we were so excited to see that she brought her incredible best accessory, her new husband!

During the pre-show interview on the red carpet, Nikki admitted that while there are a lot of hotties nominated for Male Video of the Year, but she’s a huge Keith Urban fan! And who isn’t right?

Ian and Nikki tied the knot a little over a month ago on April 26, and they made their first red carpet appearance together as a married couple at 2015 Cannes on May 20, but now their taking their love into the country world. It’s actually not that surprising that Nikki is presenting, as she has a history in music.

Nikki and her ex-husband, Paul McDonald, released an EP together, The Best Part, in 2011, and she stepped behind the camera in 2013 to actually film a music video for Hanson. So, she’s no newby to the music world — but we have to say, we’re so thrilled to see her with Ian there. They definitely still have that newly wed glow, and we couldn’t be more excited for them.

Did you love her dress, HollywoodLifers?