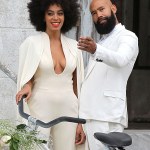 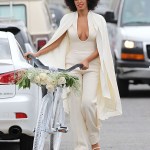 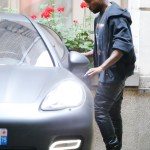 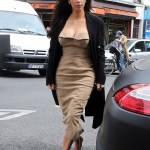 Congratulations to David Arquette and Christina McLarty! After two years of dating, the couple were wed on April 12 — and in their first official photo, David’s new bride looks very much like his ex, Courteney Cox!

David Arquette, 43, and Christina McLarty, 33, are officially married! The Never Been Kissed actor said “I Do” to Christina and sealed the deal with — of course — a kiss!  They both looked gorgeous on their special day, but we can’t help but notice how David’s new bride looked awfully similar to his ex, Courteney Cox, 50. Apparently, he has a type!

David and Christina tied the knot on April 12 with an intimate ceremony at Cicada in Los Angeles, reports the Daily Mail. The two were married in front of a small number of family and friends. David’s sister, Patricia Arquette, attended, as did actor Steven Dorff and model Charlotte McKinney.

In the first official photo of David and Christina as husband and wife, the two appear joyful at becoming newlyweds. Albeit unintentional, Christina’s bears an eerie resemblance to David’s first wife in the picture. David and Courteney married in 1999 and had a daughter together, Coco Riley Arquette, before separating in 2010. They finalized the divorce in 2013.

Regardless of similarities, David and Christina look so happy and we are happy for them. It’s so heartwarming to see a couple so madly in love. David started dating the Entertainment Tonight correspondent two years ago. They got engaged in July 2014, two months after the birth of their first son together. Fret not if you didn’t get an invitation, as the couple’s wedding will be featured in an upcoming issue of InStyle magazine, reports E! News.

David & Christina Have A Baby Boy Together

Another guest of honor at David and Christina’s wedding was their 11-month year old son, Charlie West. The toddler was present, with big sister, Coco, while his Mom and Dad tied the knot. The couple announced they were expecting a child in 2013 and welcomed their son on April 28, 2014.

Congratulations, David and Christina! Leave your own message for the new couple below, HollywoodLifers!