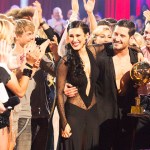 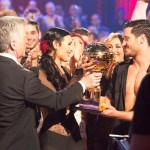 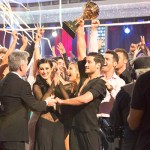 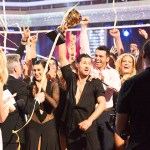 OMG, poor Noah! During rehearsal on April 6, the war vet and his partner were practicing and a HUGE accident happened — she kicked his tooth out. You have to watch this.

So Noah Galloway can literally handle anything. T dominates the dance floor on Dancing with the Stars with partner Sharna Burgess, and now he’s taking on another injury. Sharna accidentally kicked a tooth right out of his head — and he caught it. This video shows it all, and she even tweeted a message we couldn’t agree with more!

“It’s true.. I knocked out his tooth. Devastated by the whole thing! As if my man @Noah_Galloway hasn’t been through enough! #DWTS,” Noah’s partner Sharna tweeted on April 6.

Here’s the video! And yes, that’s him spitting out blood and then saying “No big deal, let’s go” afterward. Talk about determination and work ethic.

Noah Galloway Reveals Who He Thinks Is Biggest Competition

The dancer has definitely been through a lot — he lost his leg and his arm in the Iraq war, yet still puts 100 percent behind every dance every week on Dancing with the Stars. He even told HollywoodLife.com exclusively that his disability wasn’t even his toughest challenge on the show.

“Spending so much time away from my kids is the biggest challenge. Rehearsals, costume fittings and media interviews take up a lot of my time,” he told after he was announced the new face of Kenneth Cole’s fragrance, MANKIND Ultimate. Noah has three children! “The kids completely understand though that this isn’t forever – it’s just a short time. But I still miss them and can’t wait until they can come back to the ballroom again. That was the coolest feeling ever to have your children cheering for you.”

He also revealed that the competition is stiff, with Ryker Lynch and Nastia‘s “great stage presence,” and Rumor Willis coming “out of the gate strong.” Of course, he also called out Patti Labelle for her “grace and class.”

“The really awesome thing is that everyone is working so hard — nobody in this cast wants to go home,” he said. “And that only makes each of us better each week.”

Do you think Noah will win? Let us know!