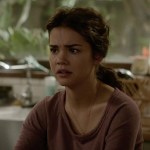 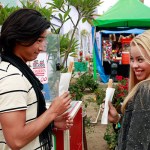 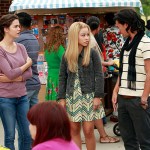 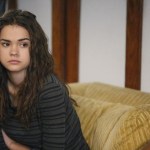 Madison Pettis is used to being in front of the cameras — but she’s not use to kissing in front of them! The 16-year-old actress experienced her first on-screen smooch during her guest role on ‘The Fosters’ and she told HollywoodLife.com all about it!

Madison Pettis is starting her guest role on ABC’s The Fosters on Feb. 9 and her character stirs up quite a bit of drama! HollywoodLife.com got the chance to sit down with Madison to hear all about her romantic (and downright awkward) first on-screen kiss — check out what she spilled about the uncomfortable experience!

Madison Pettis On ‘The Fosters’

We couldn’t wait to hear about Madison’s new role on the hit ABC Family show! She revealed that her character stirs up some serious drama:

“I play Daria. Jude and Connor have a connection going on and I get in between that. It’s sort of a love triangle. I start dating Connor and it creates a lot of drama and confusion.”

A love triangle huh? Does that mean we can expect some romantic scenes? Madison spilled:

“I actually had my first on-screen kiss on The Fosters! It’s definitely as awkward as I thought it would be. It’s a very weird situation, making sure the camera can see what you’re doing. It took way to many takes! There were like 3 different sets ups with about 5 takes each.”

Gavin MacIntosh, who plays Connor Stevens, has some experience kissing on camera but Madison revealed that it was just as awkward for him! She said:

“He’s had to kiss other people on The Fosters but it definitely wasn’t comfortable for him either, we kind of laughed every time the take was over.”

We’re sure it looks 100% natural and comfortable on the show — we can’t wait to watch!

HollywoodLifers, don’t forget to tune in to ABC Family on Feb. 9 at 8/7c to see Madison shake things up between Jude and Connor!