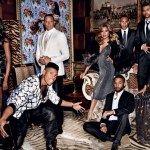 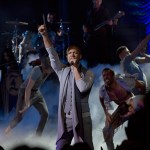 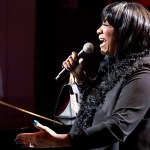 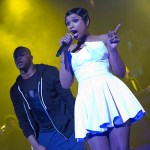 A shocking couple revealed itself on the Feb. 4 episode of ‘Empire,’ and another one was taken to a new level. Actually, it seems that everyone has found themselves in the midst of some relationship drama–romantic or otherwise.

On Empire, it seems that everyone is either scheming to get ahead or dodging threats from others who are trying to do the same. On the series’ fifth episode, Cookie (Taraji P. Henson) fears for her life after being tricked into divulging a repressed secret from her past. At the same time, Lucious (Terrence Howard) seeks out a serious fraud so that Empire can go public. Oh, and per usual, Hakeem (Bryshere Gray) and Jamal (Jussie Smollett) have it out for one another, leaving Andre (Trai Byers) free to implement his own sabotage.

Following the success of their performance on the Jan. 27 episode, we open this week with the music industry’s “it couple,” also known as Tiana (Serayah) and Hakeem. Surely that kind of pressure won’t get to either of these highly vulnerable young artists, right?

Such vulnerabilities are poked at when the two walk a red carpet together and a very oblivious journalist asks Hakeem if he’d be anything without his powerful industry father. Tiana totally has his back, though, and explains that pretty soon, everyone is going to refer to Lucious as Hakeem’s father, and not the other way around.

Hakeem takes this as a sign that Tiana is seriously into him and for a moment, we believe it too.  We obviously should have known better though, because when Tiana tells Hakeem she can’t spend the night, she walks into her own apartment and has a special someone waiting for her.

Oh, and we may want to mention that special someone is a woman. Say what?

Onto a much happier couple: Lucious surprises Anika (Grace Gealey) with her favorite pianist in their foyer and the two dance while Lucious assures her he’s prepared to fight his ALS as hard as he can. But, “however long I have left on this planet, I’m gonna make the most of it,” he tells her before taking a knee and popping that question. She of course says yes, however, it’s not all champagne and roses– Lucious says the (giant) ring needs to be put away briefly until they can break the news to their respective families veryyyyy delicately.

Why do I suspect that won’t be possible?

Back to the music. Jamal and Cookie walk into what we’re supposed to believe is a ghetto recording studio (we know because there’s graffiti on the door and flickering lights). Cookie is grossed out and uncomfortable, which is odd considering she just got out of prison, but Jamal assures her that “a lot of hits came out of this place.” After getting a mysterious text, Cookie has to step out of the studio, but tells the producer inside to take care of her boy. Then she threatens him with the gun that’s in her purse. Classic Cookie, no?

‘I Want To Change The Game’

Cookie steps outside and that pesky federal agent pulls up next to her. She tells Cookie that, because she still needs to testify, she needs protection. Cookie feels apprehensive about taking the stand though, and she believes in her heart, it will end terribly for her.

Back at Lucious’ office, Hakeem tells his old man, “I don’t want to win this game, I want to change it.”  Spoken like an ignorant teenager. Hakeem explains that he needs to step out of Lucious’ shadow if he wants to achieve that feat– which can be done, with an extra $1 million for his newest music video. Lucious is on board, but Andre on the other hand, doesn’t think the company has the money. Lucious explains that if Andre can’t find the money, he has no use for him. No wonder Andre has daddy issues.

From one negative Andre influence to another, Andre visits Rhonda (Kaitlin Doubleday) at work and enlightens him to Tiana’s girl on the side. Future tip, Tiana: if you don’t want the public to know you’re cheating on your public boyfriend (with a woman), maybe don’t have a horizontal make out sesh during a crowded photo shoot. Just a thought.

Well, too late, because Rhonda snaps a video.

Onto incriminating evidence of a different sort, we flash to Cookie in the court room, who’s being shown pictures of herself selling drugs back in the day. While once picking up her product, there was a shooting which killed the dealer. However, what Cookie didn’t know at the time but is informed of in the court room, said dealer was actually an undercover federal agent. Cookie had already given the name of the man who shot the agent, though– Frank Gathers– and she can basically foresee her fate: “Dead bitch walking.”

Meanwhile, Andre is scheming on how to use that Tiana video to his advantage– or at least it seems like it. Andre tells Lucious they’ll be able to pay for Hakeem’s video if it also features Tiana. Of course, that entails Cookie agreeing to her being featured which, as we know, is easier said than done.

‘No Board, No Tiana, No Video’

Cookie’s got far bigger problems though. When she steps out of her house and sees a rose on the ground–what she believes to be a symbol for her inevitable murder– she panics. In an instance of seriously bad timing, Andre appears at the door and begins to propose Tiana’s appearance in Hakeem’s video. Cookie says okay! With one condition: She gets a seat on the board. “No board, no Tiana, no video.” Bye, Andre!

Back in the studio, Jamal is using his new humble abode and lack of funds as inspiration for his new song. Something about a “dollar dollar bill, y’all.” He’s not happy with the intro, though, so he calls Momager for advice, but she doesn’t give him quite as much attention as he wants. These Lyon boys are a lot of things, but independent is not one of them.

Hakeem’s video seems to be going swimmingly– until Andre and Rhonda decide it’s time to open Tiana-gate and release the steamy cell footage. Hakeem, not surprisingly, is pissed. But, as Tiana points out, he too has a “side piece.” Well either way, that’s a wrap on the Hakeem/Tiana video…indefinitely.

Andre’s brotherly sabotage doesn’t stop there. Gabbing loudly on a (fake) phone call about how his sissy brother is wearing tens of thousands of dollars worth of swag on him as well as divulging his location, he makes sure some questionable dudes can hear. Cut to: a couple thugs shooting up Jamal’s studio session. Jamal recognizes one of the guys as a friend of Hakeem, and mistakenly thinks it’s his younger brother who’s set him up. Worse yet, the shooting means his studio sesh is finito.

In an extremely unsurprising turn of events, we find out Anika’s parents aren’t thrilled with Lucious. This is made worse when Lucious asks her doctor father to vouch for his good health so Empire can go public. He agrees, however, after he learns that it would make Anika a billionaire.

Cookie, meanwhile, is handling her business as well. She hires a friend to take care of the man who’s after her. “And you do know what I mean by ‘take care of?'” He did.

Hakeem’s immaturity is showing (again) as he refuses to work with Tiana post-girlfriend revelation. However, Lucious manages to turn the situation around. “Let’s look at it from a mathematical perspective,” father tells son. “Your girlfriend’s got a girlfriend. Add that up: Two girlfriends.” That’s math even Hakeem can understand and for some reason the music video is back on.

Jamal confronts Hakeem about getting his studio session shot up. He, of course, has the wrong brother, but that doesn’t prevent him from socking Hakeem in the gut. After Jamal storms out, Hakeem calls Andre and says he needs some money real quick to get his video dropped before Jamal’s in order to show his brother who’s really in charge.

Finally, Lucious pays Cookie a (very) late night visit to explain that he was actually the one who dropped off that rose to honor their anniversary (again, it’s surely just a matter of time until these two get together, right?). Upon this realization, Cookie tries to call off her hit, but as we see, she’s too late.

“Smell the roses,” the hired hit says before firing off what looks like a hundred bullets.

Talk about an episode that goes out with a bang.

What did you think of tonight’s Empire? Do you think Hakeem or Jamal’s song is going to come out on top?