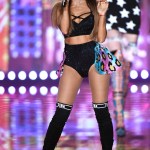 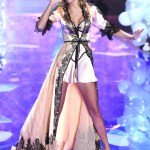 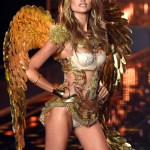 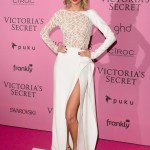 Ed Sheeran, 23, was all the rage after his hilarious dirty joke with Ariana Grande, 21, at the 2014 Victoria’s Secret Fashion Show. However, new pictures of the singer have surfaced online that show him wearing sexy black lace lingerie on the runway. Whoa!

VSFW: Ed Sheeran Rocks Sexy Lingerie — Or Did He?

If you dreamed of one day seeing Ed Sheeran walking down a runway in a sexy lace lingerie one-piece, then you are in luck!

Thanks to a wonderful application called Photo Shop, a Reddit user completely stripped Ed of his handsome suit and, instead, replaced his outfit with the lace lingerie piece.

Not only is the editing work pristine, but by the looks on the faces of the models next to Ed, you would totally think it was a real photo.

Unfortunately, it’s not. Bummer, I know!

The good thing about sharing the stage with other is that they can help make you feel at ease.

That’s what Ariana Grande did for Ed at the fashion show when she reportedly leaned over to tell him a little something dirty in his ear!

To find out what Ariana said to Ed, you’ll have to check out HollywoodLife.com‘s previous article.

Tell us, HollywoodLifers — Did you think this picture was real? Would you like to see Ed in lingerie? Comment below!