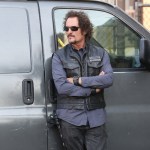 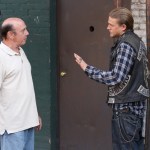 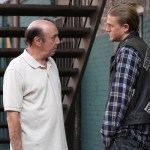 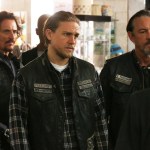 Writing through tears here! Following the gruesome death on ‘Sons of Anarchy,’ HollywoodLife.com exclusively spoke to the latest victim about their survival skills over the years . . . until now.

Warning — if you didn’t watch the new episode of Sons of Anarchy on Nov. 4, do not keep reading. SPOILERS AHEAD!

Alright, if you’ve clicked in, that means you’ve watched “What a Piece of Work is Man,” (or you love spoilers) and know that after two weeks of seriously suffering, Bobby (Mark Boone Jr.)’s life came to a bloody end — literally in the hands of Jax (Charlie Hunnam).

Luckily, we got the opportunity to speak to Mark exclusively at the Chiller Expo, and we had to know — how did he survive this long?

“Why is Bobby still alive? Because the polls that FX takes, says that he’s a very popular character, that’s why Bobby’s still alive,” he told us. Oh, so he was the favorite, huh?

“I didn’t say that I was the favorite,” he said, laughing afterward. So, how long in advance did he know that his character would not only lose an eye, and a finger, but then his life?

“We get the script like, the day we start shooting the episode,” he revealed.

Jax: How Will He Go On Without Bobby?

We know that both Jax and Gemma (Katey Sagal) are going to have a seriously hard time. Jax feels guilty since it was his choice to betray the ones who killed him. However, it’s really Gemma’s fault… because, what isn’t at this point?

However, I’m not worried about her– but I am worried about Jax. He has the rest of SAMCRO, but it’s not the same, as Kim Coates, who plays Tig, told us.

“Jax and Tigg, there’s a bond there, but I mean, it’s not the same bond that Chibbs has with Jax, or Bobby has with Jax,” he told HollywoodLife.com exclusively.

So, what now? Which SAMCRO member will die next? Will it be Juice in jail? Will it be Jax? Will Gemma finally confess? SO many questions and SO little time. Until next week.