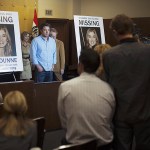 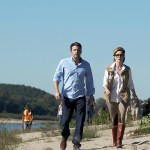 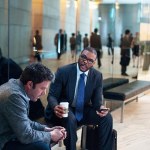 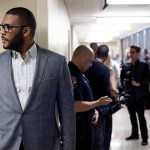 Rosamund Pike is frighteningly impressive, Ben Affleck is stoic and breathtaking — and they’re just the beginning of the story of Gone Girl. The adaptation of the epic book lives up to the expectations readers wanted, especially mine, by providing a suspenseful story of what happens when love goes horribly wrong.

Famed Director David Fincher has done it, yet again. From the moment we meet Nick Dunne (Ben) and Amy Elliot (Rosamund), I instantly felt that connection — the passion behind Amy and the nurture inside Nick.

While the film is full of twists and turns that — trust me — you won’t see coming, I want to be very strategic in my review. Needless to say, there will be no spoilers within.

The film begins with a memory of Nick running his hands through his wife’s hair, speaking softy about cracking her skull, which of course, sets the tone. Fincher makes sure to remind us that the passion behind their romance is deeper than meets the eye.

Back to real time. It’s their five year anniversary and after Nick returns from his bar (ironically titled, The Bar), he walks in to their Missouri home to find his wife missing, his living room table shattered.

So we begin the search. Luckily, clues have been left behind.

Nick Searches For His Wife, While Finding Himself

Again, without giving anything away, the police, Nick, as well as his sister, Margo (Carrie Coon) begin looking for Amy. Through flashbacks, we learn the history of their relationship — Amy has kept it all in a diary, and we see it all through her perspective: their first date; the proposal; their living arrangements, etc.

Usually I shy away from the flash between current and past times, as I feel the story gets lost — but this does the exact opposite. It strengthens it.

Amy, much to my surprise, actually grew into fame as the daughter of author, Marybeth (Lisa Banes), who wrote a series of books based on the life she never gave her daughter: Amazing Amy. Marybeth and her husband come to Missouri to assist with the search, but really help us dig deeper on the person Amy is, rather than where she is.

Amy is a woman who has come to resent her husband for the changes made in their lives, but will hold on by a thread to their marriage. Meanwhile, Nick is the man who loves his wife to death, but mistakes and life-altering decisions have gotten in the way of that.

Everyone Is A Suspect

While the town gathers to try and find the beloved Amy, Nick goes through her past to uncover the secret men in her dark past — including a sweetly creepy, Desi Collins (Neil Patrick Harris), who had attempted suicide after their split in college. However, he is quickly made the suspect, and as a viewer, I was left battling what I wanted to be true and what was actually true.

As I walked out of the theater, my mind was spinning with questions that had already been answered, but I couldn’t help but want more. I couldn’t rave enough about the stars of the film, especially Rosamund, who made every possible phase of life look more stunning than the last.

Trent Reznor‘s music naturally filled each moment with the perfect amount of build up. My only complaint (and it’s a small one) is that no song stuck out, the way that Trent’s cover of “Creep” did in The Social Network.

The film hits theaters everywhere on Oct. 3. My suggestion: see it, and see it again. You will be moved, curious and again, like me, just wanting more.