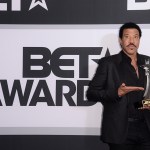 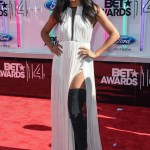 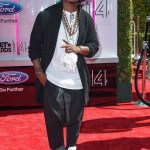 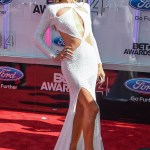 Jeremy Meeks’ 15 minutes are nearly up, but the foxy felon made an appearance in a huge way at the BET Awards on June 29!

The mugshot of Jeremy Meeks, a 30-year-old felon who was arrested for charges of “street terrorism,” among other things, went viral on June 18 following his arrest due to his admittedly strikingly good looks. However, while you’d think that his fame would have run out by now, you’d be wrong — he was signed a few days ago by agent Gina Rodriguez, and at the BET Awards on June 29, he made an appearance in a huge — and hilarious — way, thanks to stars Gabrielle Union and Regina Hall!

Gabrielle and Regina — in a gorgeous white pantsuit created by Chagoury — hit the Nokia Theater stage to present the first award of the night for Best New Artist, but their onstage banter revolved around Jeremy Meeks. “Ladies, we need to talk,” Gabrielle told the crowd. “Y’all are obsessed with this dude. I mean, for real. A criminal? This picture was posted on a police department Facebook page. My question is: who in the hell is looking for a date on a police department Facebook page?!” She makes a good point.

“It’s true, ladies, I mean, for real. What’s next? Speed dating in a police lineup?” Regina added, to which Gabrielle fired back: “Escaping in to prison to find a man?” “Going on Scared Straight to find a date? Asking your girl to hook you up with blind conjugal visits?”

Gabrielle Union: ‘What Did Prison Bae Give Us?’

An exasperated Gabrielle asked the audience, “Where were y’all when Bobby Brown went to jail? At least he gave us ‘My Prerogative!’ What did Prison Bae give us?”

August Alsina would go on to win Best New Artist, but we all know who the real winner is — Jeremy  Meeks, because two hot ladies talked about him on television in front of millions of people. JK, though, he’s going to be in jail forever.

So, HollywoodLifers, did you think Jeremy Meeks’ mention at the BET Awards was funny? Or are you over that whole business by now? Let us know!