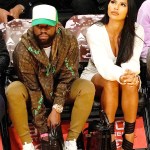 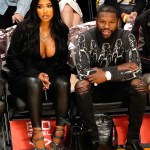 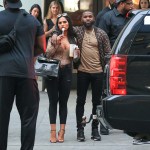 Everyone was shocked that T.I. would throw a punch at boxer Floyd Mayweather in Las Vegas, but was it all over an Instagram post?

On May 25, T.I., 33, was caught on camera actually trying to fight boxer Floyd Mayweather Jr., 37, outside Fatburger, a burger joint on the Las Vegas strip. In the video of the fight, we can hear both men yelling — and they don’t sound happy. The fight reportedly began when T.I.’s wife, Tameka “Tiny” Cottle posted a pic on Instagram with Floyd’s daughter, Iyanna Mayweather.

T.I. and Floyd’s fight was captured on video by TMZ, and also featured audio. In the videos, we see chairs flying and we can hear Floyd yelling at T.I., “control your bi— motherf—–.”

Now, TMZ is reporting that Floyd and T.I. are actually friends, but the rapper got angry after his wife posted a pic on Instagram with Money’s daughter, with the caption, “Had to come celebrate with my new boo @moneyyaya Happy Birthday bae.”

Floyd Mayweather Interview: T.I. ‘Must’ve Forgot What I Do For A Living’

After seeing this, Tip thought that it meant that Floyd was trying to get closer to his wife.

The report went on to explain that Floyd is actually upset that T.I. would think that, when they’re all friendly. Plus, it was Tiny’s idea to hang out in Las Vegas in the first place. She was not on the scene when the fight went down, but was elsewhere in Vegas.

What do you think, HollywoodLifers? Are you shocked by the fight? Let us know!