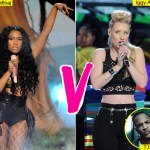 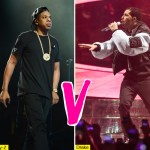 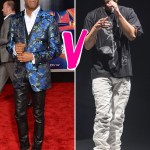 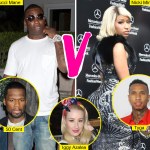 Once again, Tyler has created a new enemy. The Odd Future rapper took things a little too far when he targeted Iggy Azalea in a little game of marry, kiss or diss on ‘106 & Park’ on May 15 — and Iggy was NOT having it.

Though everyone expects Tyler, The Creator to be hip-hop’s prankster, his disses can still sting. Just ask Iggy Azalea, who lashed out at Tyler on Twitter on May 15 after he slammed her with an insensitive joke while on 106 & Park.

106 & Park hosts Bow Wow and Angelina Simmons had Tyler and his Odd Future entourage play what was supposed to be a friendly game of marry, kiss or diss, but Tyler took things negative when the show put Iggy against Rita Ora and M.I.A. “I don’t want Iggy, she stinks,” Tyler blurted out. “I want real booty, you feel me?”

As you can imagine, Iggy didn’t love Tyler’s comments, and she took to Twitter to vent:

Tyler the creator is beyond immature. I’ve always believed you had something more to offer the world, Shame to see you be so rude.

People that make enemies and talk shit about ppl they’ve never even said hi to trip me out. I see it all the time… Strange world.

Right on, Iggy! Tyler responded quickly, backtracking on his comments a bit by claiming he was just trolling Iggy and looking to stir up drama:

IGGY I DIDNT MEAN TO HURT YOUR FEELINGS

Tyler, The Creator Vs. Iggy Azalea: Who Was Right?

We’re gonna go ahead and say that even if Tyler didn’t mean to hurt Iggy, his comments hardly seemed to be said in a joking manner, and were so mean-spirited that we can’t blame Iggy for getting offended.

For her part, Iggy handled the situation pretty well. Her response was measured and mature — a stark contrast to Tyler. Anyways, I’m pretty sure we shouldn’t be expecting an Iggy-Tyler collaboration in the near future!

What do you think, HollywoodLifers? Was Tyler out of line, or should Iggy learn to take a joke? Let us know!