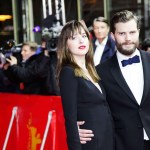 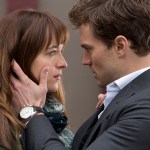 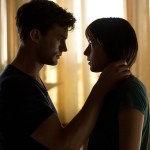 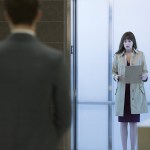 Dakota is in the midst of filming her sexually charged film, ‘Fifty Shades of Grey’ but her boyfriend, Jordan Masterson, is reportedly not too thrilled with her newfound fame. Do you think he should be more supportive?

Dakota Johnson has landed the role of a lifetime, the chance to play Anastasia Steel in E.L. James‘ screen adaptation of Fifty Shades of Grey. But with this racy role, comes challenges in her personal life, according to Star magazine.

The actress’s boyfriend is reportedly not very happy with all the attention she’s getting.

“The attention she is getting bugs him,” the source claims.

Cameras rolled as Dakota leaned in and planted a sultry kiss on her hunky co-star. She maintained that Anastasia Steele look with a plain, business-like outfit consisting of a simple skirt and a trench coat, but her kiss looked sexy and seductive.

Jamie meanwhile, appears to have Christian Grey down pat. Decked out in a sharp suit sans tie, Jamie had a look of pleasure and passion (with a hint of deviousness!) on his face.

Dakota and Jamie may not have been who fans pictured for the roles of Anastasia and Christian, but the most important factor for the success of the Fifty Shades of Grey adaptation is the chemistry between the two lead actors — and just from this picture, we can tell Dakota and Jamie have an overflowing amount.

If this kiss has us panting, the whole movie is probably going to cause us to faint! Especially because the producers of Fifty Shades revealed that they’re considering releasing an NC-17 version of the movie.

“What we’re hearing is that [the fans] want it dirty,” producer Dana Brunetti told Collider. “They want it as close to the book as possible. We could release the R-rated version, which everyone will enjoy, and then for those fans who want to get a little gritty we could release an NC-17 version a few weeks later.”

HollywoodLifers, do you think Dakota’s boyfriend should be more supportive?