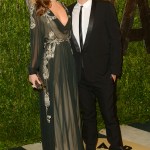 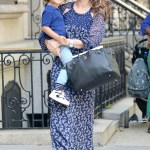 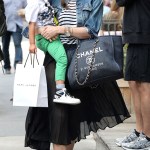 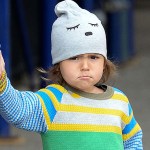 Oh no! It appears that Justin’s flirty relationship with Miranda Kerr went past that one night after the Victoria’s Secret Fashion Show!

Justin Bieber and Miranda Kerr allegedly partied all night together after the fashion show in Nov. 2012, which caused serious tension in her marriage with Orlando Bloom, ultimately leading to their split. Miranda and Justin have also been exchanging “dirty texts,” according to a new report!

“She’s always very flirty with him” and they have exchanged “dirty texts,” a source told Us magazine about Justin and Miranda. Ouch!

Miranda, 30, was spotted backstage after the fashion show, hanging with Biebs — who was 18 at the time.

“Orlando heard that there had been some ­flirting ­going on and he wasn’t exactly thrilled about it,” a source told The Mirror.

Additionally, she apparently taught their son Flynn how to say “Bieber Fever.” After the show, Justin reportedly headed to a nearby hotel where he partied with Miranda all night.

The tension over Miranda’s friendship with Justin was one of many factors that played a part in their separation. “Orlando and Miranda argued non stop,” a source told Us.

The couple publicly formalized their separation on Oct. 24, 2013, saying that they had been apart for months.

“Despite this being the end of their marriage, they love, support and respect each other as both parents of their son and as family,” the statement continued.

And we’ve seen the family functioning! Just two days after the split, they stepped out with their son looking happy and even shared a sweet kiss on the cheek goodbye.

It’s good there’s no hard feelings between them — even if she was dirty texting Justin!

So, HollywoodLifers — what do you think of Miranda and Justin texting? Are you surprised? Let us know!