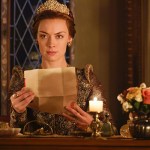 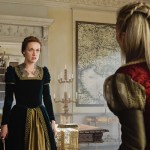 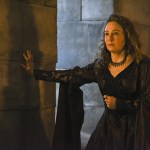 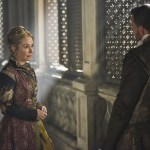 The CW’s ‘Reign’ is more ‘historical fan-fiction’ than a direct retelling, HollywoodLife.com is told.

Reign, the new romantic drama about Mary Queen of Scots, premiered Oct. 17 to much fanfare — and apparently some confusion about the show’s historical accuracy. But that’s where HollywoodLife.com can help! We recently paid a visit the show’s Toronto set, where the cast gave us the scoop on just how true-to-life this show is going to be.

Perhaps Anna Popplewell, who plays lady-in-waiting Lola, summed it up best when she told us:

It’s like historical fan-fiction. You’ve got these people we’ve all heard of, and we’re watching them experience relationships and events that never happened. I’ve found that it’s very easy to cling to research and get caught up in the accuracy of things. With Reign, it’s about exploring these wild characters in hypothetical situations. We’ve kind of created a new world; it’s fantasy history.

Even the accents are going to be a little different on Reign than they actually were.

That said, Reign isn’t going totally off the history book. Mary’s (Adelaide Kane) relationship with Francis (Toby Regbo), for example, is going to play out exactly as you learned in school.

“Historically speaking — and we are going to stay true to this — she does end up marrying Francis,” Adelaide told us. “That’s a foregone conclusion.”

Of course, some cast members are hoping the show strays far from history — especially Alan Van Sprang, whose days as King Henry are numbered.

“When he turned 28, he became king, then died shortly thereafter in a jousting accident,” Alan recalled. “So I’m 40 now, but whether or not that happens sooner or later, probably… probably not.”

HollywoodLifers, does it bug you that Reign strays from the history books, or do you like it better for doing so? Drop a comment with your thoughts on the new CW series below!