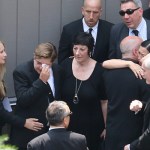 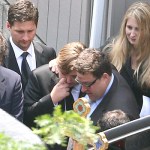 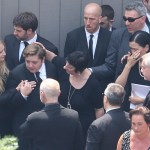 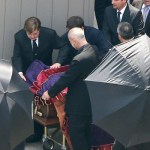 Following James’ sad death from an alleged heart attack, his cast mates from the famous show ‘The Sopranos’ have spoken out and called the news ‘devastating,’ while NJ governor Chris Christie has called him a local ‘treasure.’

James Gandolfini, star of the hit television series The Sopranos, died on June 19 from a reported heart attack and his former cast mates are devastated. His cast mate David Proval said that it is like “losing a family member,” while Lorraine Bracco is “utterly heartbroken.”

James, 51, starred in the show from 1999 to 2007 as mobster Tony Soprano, and he left quite an impression on his cast mates.

“The guy was like a brother to me. He was a great actor, a great father and was a lot of laughs,” Steve Schirripa, who played Bobby Bacala on the show, told the New York Post. “This is devastating. When I say we were like family, this is very much like losing a family member.”

“I couldn’t have asked for any better actor or better gentleman to work with,” said David Proval, who played Tony’s brother in law Richie Aprile. “His generosity was unmatched. He was always right there for me during the show. It was a head-spinning experience for everyone, yet he always found the time for me and everyone on the cast.”

“He was very protective,” David continues. “We’d hear stories over the years about who was going next. He’d say, ‘Don’t worry, I’m here for you.’”

Lorraine Bracco, who played the therapist Dr. Jennifer Melfi, said, “We lost a giant today. I am utterly heartbroken.”

It is clear that James’ death has shocked his cast mates, including his on screen enemies.

“We were enemies on screen, but pretty good friends off screen,” said Frank Vincent, who played rival mobster Phil Leotardo. “Jim was a loving guy who just enjoyed life. It’s a sad and tragic thing that’s happened. I feel bad for his family.

“He always had something to say — you know how the guys are. It was a men’s club and everybody had a good time all the time. Jimmy was the perfect choice for Tony Soprano.”

“I have lost a brother and a best friend,” wrote Steven Van Zandt, who played strip-club owner Silvio Dante on his Facebook. “The world has lost one of the greatest actors of all time. Maureen and I send our deepest sympathy and love to Deborah, Michael, Lily, and all of Jimmy’s family.”

This news has left me heartbroken. I can only imagine the pain his family feels at this time, and my heart goes out to them, especially Deborah, Michael and Liliana. I spent 10 years of my life studying and admiring one of the most brilliant actors, yes, but more importantly one of the greatest men. Jim had the ability, unbeknownst to him, to make you feel like everything would be alright if he was around. I treasure my memories with him and feel so honored that I was an up close witness to his greatness.

James on screen wife Edie Falco released the most touching statement of them all:

The love between Tony and Carmela was one of the greatest I’ve ever known. I am shocked and devastated by Jim’s passing. He was a man of tremendous depth and sensitivity, with a kindness and generosity beyond words. I consider myself very lucky to have spent 10 years as his close colleague. My heart goes out to his family. I will hold on to the memories of our intense and beautiful time together.

New Jersey governor Chris also released a touching comment about James’ death, where he calls him a “treasure.”

It’s an awful shock. James Gandolfini was a fine actor, a Rutgers alum and a true Jersey guy. I was a huge fan of his and the character he played so authentically, Tony Soprano. I have gotten to know Jimmy and many of the other actors in the Sopranos cast and I can say that each of them are an individual New Jersey treasure. Mary Pat and I express our deepest sympathies to Mr. Gandolfini’s wife and children, and our prayers are with them at this terrible time.

I admire Jimmy as a ferocious actor, a gentle soul and a genuinely funny man. I am fortunate to have sat across the table from him and am gutted by this loss. I wish his family strength and some semblance of peace.

HollywoodLife.com spoke to actor Kevin O’Rourke, who guest-starred with James in the first season of The Sopranos and maintained a friendship with him ever since. He told HollywoodLife.com exclusively:

I met Jimmy on the first season of The Sopranos. He was a very generous and kind guy. I remember working with him on the very first day that we shot and he was shocked by the success of The Sopranos. He couldn’t have been nicer and he often talked to me about my career in theater because he was interested in theater too. He actually got his own big break when he was an understudy for the role of Mitch in A Streetcar Named Desire. He blew people away with how he handled the role. And after that, he started getting offers for movies and TV roles.

And Kevin maintains that James is nothing like Tony Soprano, the fictional mob boss.

He wasn’t at all like Tony Soprano. He was very loyal to people because they were good actors or performers, not because it would improve his standing in Hollywood. He actually helped actors who were in the Screen Actor’s Guild. He came to meetings and he asked ‘What can I do as a man of my profile to help actors get what they need in these negotiations?’ He came because he wanted to help actors who were less fortunate than he was. That’s the kind of person he was.

James is survived by his wife, former model Deborah Lin, who gave birth to the couple’s daughter, Liliana Ruth Gandolfini, on October 10, 2012. The legendary actor also has a teenage son, Michael, from a previous marriage.

Our thoughts go out to James’ wife and children.

What do YOU think HollywoodLifers? Are you touched by what the cast had to say?

WATCH: James Gandolfini Dead of Heart Attack at 51 in Italy