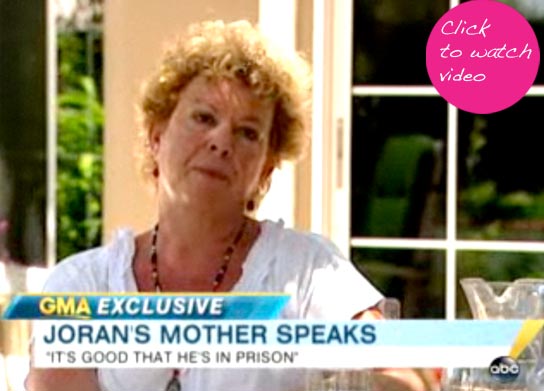 Anita van der Sloot opens up about her imprisoned son saying he has a ‘personality disorder’ and needs help.

The mother of accused murderer Joran van der Sloot is speaking out for the first time about her notorious son and apologizing to the family of his victim, Stephany Flores. In a Dutch interview obtained by ABC News, Anita van der Sloot said, “I hope that he gets a chance to talk with the parents of Stephany Flores, and that he can tell them what happened. And I apologize for them … that he’s my son. He’s not a monster. He can be very gentle, but it could be that he has bipolar personality. I hope he gets the help.”

Joran is accused of murdering 21-year-old Stephany in a Peruvian hotel room after a night of gambling. While he initially confessed to the murder he later retracted his statement to a Dutch newspaper claiming he could not understand the document he was signing as it was in Spanish.

In an cryptic twist of fate, the murder of Stephany came five years to the day American teen Natalee Holloway went missing in Aruba, a crime 22-year-old Joran is widely believed to have committed. He is also being charged with extorting $25,000 from Natalee’s mother Beth Twitty after promising he would show her where the body of her daughter was buried.

Anita admits even she finds it hard to proclaim her son’s innocence. “I think a part of me still wants to believe that it’s all a very bad movie. But I thought immediately of the parents of the girl.”

More of Anita’s interview appears in the video below.