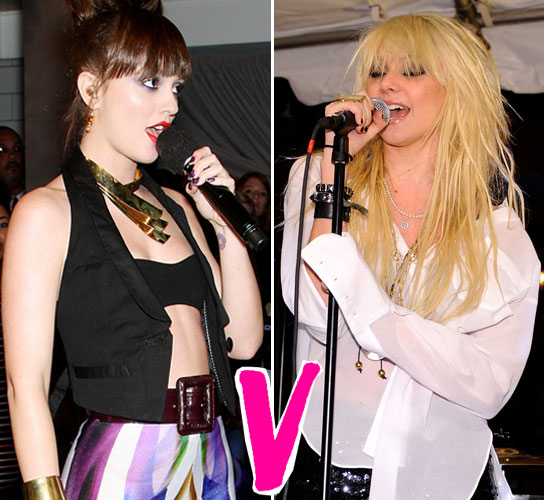 What do you get when you take two young, hot starlets, put them on the same hit television show, but only give one of their albums play on that show?  Lots of behind-the-scenes tension!

Gossip Girl stars Taylor Momsen, 16 and Leighton Meester, 23 are not only rivals on the show, their competing music is making them rival rock stars as well.

Sources tell HollywoodLife.com exclusively, “Taylor is not happy that Gossip Girl has been playing Leighton’s music on the show, and they have never asked to play any of her songs.  It’s creating a lot of tension on set.”

Gossip Girl used Leighton’s songs “Good Girls Go Bad” and “Somebody To Love” during two episodes this season, and the CW show even premiered her music video for “Somebody To Love.”  They have never used any of Taylor’s songs.

Taylor’s grunge band “The Pretty Reckless” has not yet released an album, but is signed to Interscope. Leighton’s solo album, with Universal Republic, includes songs with Cobra Starship and Robin Thicke, and is slated to debut in early 2010.  Both girls have already released singles online and performed concerts in NYC in the past year.

So why the favoritism towards Leighton’s music?  Our source doesn’t know for sure, but one insider said, “Leighton’s pop music fits the theme of Gossip Girl more than Taylor’s punk rock songs.”

A rep for the CW told HollywoodLife.com, “The show will support Taylor and her music when the time is right, but her music is not ready yet.”