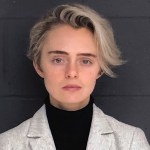 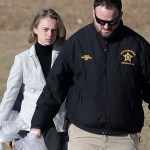 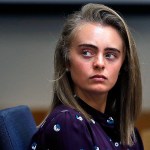 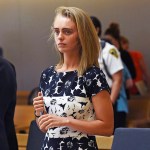 Michelle Carter, the woman convicted of involuntary manslaughter in 2017 after convincing her boyfriend to commit suicide, has been released early from prison after serving 11 months.

Michelle Carter, 23, the woman who, as a teen, convinced her boyfriend via text messages to commit suicide, was released four months early from prison on January 23. Carter served 11 months of her 15-month sentence after earning enough “good time,” Jonathan Darling, a spokesperson for the Bristol County Sheriff’s Office, said in a statement. The Massachusetts woman was convicted of involuntary manslaughter in 2017 for the death of Conrad Roy, who died by suicide in 2014, when he was just 18 years old. Roy filled his car with carbon monoxide in a Kmart parking lot, and after texting his girlfriend his fears, and that he had changed his mind, she convinced him to get back in and “just do it.”

“Ms. Carter has been a model inmate in Bristol County,” Darling said in the statement. “She has attended programs, had a job inside the jail, has been polite to our staff and volunteers, has gotten along with other inmates, and we’ve had no discipline issues with her whatsoever.”  Carter now has five years of probation ahead of her. Her release comes one week after the Supreme Court denied her appeal to hear the case and overturn her conviction. Here’s what else you need to know about Carter and the headline-making case:

1. She was found guilty of encouraging Roy to commit suicide. Carter was on trial because of a series of texts she sent Roy that prosecutors said caused him to commit suicide. Roy repeatedly messaged her saying that he was reluctant to kill himself, and was trying to back out of his plans. But instead of comforting her severely depressed boyfriend and urging him to get help, Carter messaged him that he should go through with it. Here’s an example of one of the disturbing conversations between Carter and Roy before his death:

Michelle: “Last night was it. You keep pushing it off and you say you’ll do it (commit suicide), but you never do. It’s always gonna be that way if you don’t take action. You’re just making it harder on yourself by pushing it off. You just have to do it. Do you want to do it now?”

Conrad: “Is it too late? I don’t know. It’s already light outside. I’m gonna go back too [sic] sleep. Love you. I’ll text you tomorrow.”

Michelle: “No. It’s probably the best time now because everyone is sleeping. Just go somewhere in your truck and no one is really out there right now because it’s an awkward time. If you don’t do it now you’re never gonna do it, and you can say you’ll do it tomorrow, but you probably won’t. Tonight? Love you.”

In another text, Carter told her boyfriend that “You’re finally going to be happy in heaven. No more pain. It’s okay to be scared and it’s normal. I mean, you’re about to die.” Roy was found dead the next day in the parking lot of a Kmart just outside Boston.

3. She was convicted even though suicide through coercion isn’t a crime in MA. Carter’s  lawyers thought she couldn’t be convicted of involuntary manslaughter. “Usually, manslaughter charges involve direct action by the defendant… some type of horrific unintentional killing where the behavior disregarded a risk, like firing a gun into a crowd,” Daniel Medwed, a law and criminal justice professor at Northeastern University, told The Washington Post in 2017. “This is different.

“Defense lawyers [would] argue that he’s had suicidal tendencies predating their relationship. They’re going to emphasize that he was alone in his car, that ultimately it was his decision…” Medwed said. “There may be an issue on the extent to which she was aware of the risk. She knew he was suicidal, but did she know that he was going to go through with it?”

4. She told a friend that Roy’s death was her fault. Carter texted an unnamed friend after Roy died, telling them that, “he just called me and there was a loud noise like a motor and I heard moaning like someone was in pain, and he wouldn’t answer when I said his name. I stayed on the phone for like 20 mins and that’s all I heard… His death was my fault… he got out of the car, and I told him to get back in… because I knew he would do it all over again the next day.” She also texted the friend, “I helped ease him into it and told him it was okay… I could’ve easily stopped him or called the police but I didn’t…”

5. Her lawyer claimed she was “brainwashed” by Roy. Eleven days before his death, Roy sent Carter a text saying that they should commit suicide together like “Romeo and Juliet.” Carter refused, according to her lawyer, and told him to come join her at a psychiatric facility in Belmont, MA, where she was staying to get treatment for depression. “[Roy] ultimately persuaded a young, impressionable girl,” the attorney told reporters. “Eventually, he gets her to endorse his plan.”