There’s excitement in Adam Doleac’s voice when he speaks about what’s coming next. “We’re about to go out with Jessie James Decker, my good buddy,” says Adam, 33, referring to Jessie’s The Woman I’ve Become Tour. First kicking off on April 14 in Detroit, the tour will see Adam, in support of Jessie, travel across the country, with a stop at Nashville’s history Ryam Auditorium on Apr. 28. Every night might as well be a historic one for Adam, as this tour is a chance for this rising country star to show what he’s been cooking up for the past few years. “I’ve got some things up my sleeve for this tour,” he tells HollywoodLife. “It’s gonna be a blast. I’ve obviously had a couple of years to think about what I want to do on this tour.”

“Plus, Jesse and her husband, Eric [Decker], are really great friends. So we’re excited to spend a lot of time together,” adds Adam. “I think I’m gonna go out and sing a couple of songs with Jesse every night too. We got some fun things in store for it.” Adam will also sing a couple of his songs – and he has plenty to pick from. He famously wrote more than 150 songs during COVID, which he chalks up to him just finding something to do with his free time. “I’m very much the type that’s very goal-oriented,” says Adam. “A very driven, type of business mind. So I had to put my energy into something. I put my energy into songwriting. I probably wrote four or five records that I could be proud of in that year and a half.”

One of those songs is his recent hit, “Drinkin’ It Wrong.” The perfect party jam for the summer – or any season – “Drinkin’ It Wrong” is a celebration of celebrating, about lifting your chin and raising your spirits instead of hanging your head with the weight of the world. It’s a perfect song to greet the world on the other side of the lockdown, especially since Adam wrote it during the dark days of the pandemic.

“It was just bad news,” recalls Adam. “Every channel, every station: bad news. And I remember thinking this was towards the beginning, and I didn’t know how long it was gonna last, but I remember saying that day I was like, ‘we need something to come back to, whenever the world does open back up.’” Adam says that “Drinkin’ It Wrong” was a song meant for parties, dive bars, and summer barbecues. “I want a song that the crowd can put a beer in the air and forget about all this bad news, forget about everything going on, and lose themselves in music, like what we’re supposed to do with a concert and a show.”

“I remember we wrote it,” says Adam, referring to his songwriting partners Jordan Schmidt and Carrie Barlow. “It’s turned into this fun summery, fan-favorite song that we love playing live. It’s just going to be kind of the start, the start to everything, the mood we wanna be in the start to the show.”

That mood is exemplified in the “Drinkin’ It Wrong” music video, a visual that saw Adam take a tour throughout a bar that’s starting to get back to the hustle and bustle of a pre-COVID world. “A couple of fun facts about that video,” Adam tells HollywoodLife. “First of all, it’s a one-take. So if you’re watching it, the camera never cuts. It follows me the entire time. And that’s, it’s a literal one-take situation, which I’ve never done before and was really fun and pretty challenging, too. You have to have your timing exactly right.”

There is also one scene involving a patron with a curly straw, which Adam says was all improv. “The curly straws and the girl drinking a beer and the guy drinking a mocktail — it was all set up in the shot without telling me. So [the director] goes, ‘all right, I got some things hiding for you. We’re just gonna see what you find.’ And so there was stuff throughout the video that I would walk up to the table and on the fly, I have to be like, ‘Oh, there’s a purple curly straw in that beer. I should probably take that off.’” This isn’t to say that Adam Doleac is anti-silly straws. “To be honest, I mean, I had a curly straw phase at one at one part of my, it was, it was several, several years ago, but nothing against them,” he adds with a laugh. 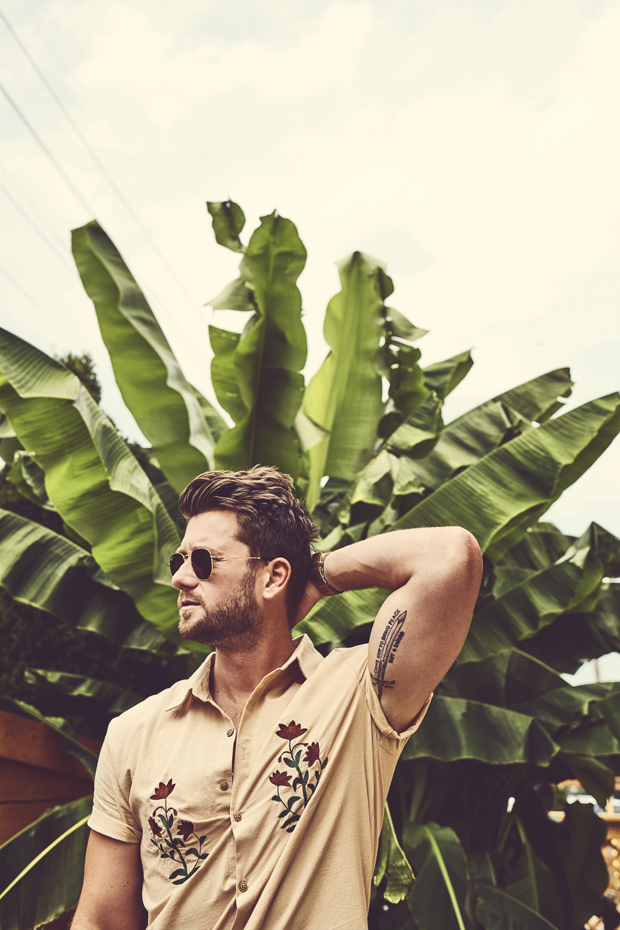 This tour will be the first chance many get to know the name Adam Doleac. The second chance is coming soon.  Though Adam’s been at this music hustle for a few years, he’s yet to release a full-length studio album, but that is going to change.

“I’m so excited about the album,” He says. “We’re living in a time where it’s never been cooler to be anything but yourself, right? I mean, fans relate to [musicians] just being honest and being themselves. And that’s kind of what happened over the quarantine. Everybody was very honest, sitting in sweatpants on their couch with their phone out. You know, it got as honest as honest as you get!”

“People were like, ‘this is nice,’” continues Adam. “And so, it changed my mindset, writing that in that way of just being myself and putting together a body of music. That’s what this album is. It’s 13 brand new songs, which coming from a guy who’s only really released single after single, is very exciting. And it’ll be the first time fans will get to hear a complete body of work —  with every emotion from me.” When asked about a potential release date, Adam said it’s set for later this year. So, in the meantime, fans should get tickets to see him when it comes to their town – be it with Jessie James Decker or when he eventually hits the road for his own headlining tour.