The nostalgia is at an all-time high. Adam Sandler and Cole Sprouse reunited 20 years after they played father and son on the big screen in the 1999 comedy, Big Daddy. Cole stepped out to support his longtime friend at the LA premiere of Adam’s new film crime comedy, Uncut Gems on December 11.

The actors posed for a photo together, where Cole, 27, was pictured with his arm around Adam, 53, and another friend. Both stars were all smiles, and we’re hoping it’s because they were reminiscing about their Big Daddy days. Cole, whose twin brother Dylan Sprouse also starred in the film as the same character (Julian), was just 7-years-old when the movie was filmed.

Big Daddy is still a big deal amongst fans and often airs on television to this day. The film follows a young bachelor, Sonny Koufax (played by Adam), who is a toll collector in New York City. He spent his entire life avoiding the responsibilities of growing up, and when his girlfriend dumps him for an older man, he tries to prove that he is capable of growing up. So, he adopts a 5-year-old son, Julian (played by the Sprouse brothers) in an attempt to win her back. But, when she’s not impressed, Sonny can’t just give back the kid. (Spoilers ahead) After some major father-son growing pains, and a brief separation, Sonny and Julian end up happily ever after as a family. 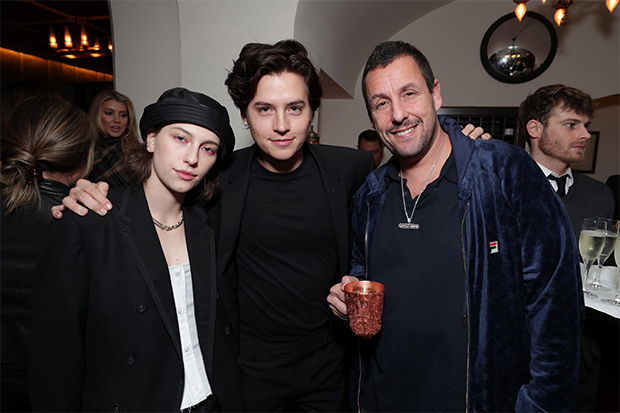 Fast-forward 20 years later and both Adam and Cole are still on the Hollywood scene with thriving acting careers. Cole is a regular on the wildly popular CW television series Riverdale, among other projects he has in the works. Back in September, Cole celebrated more of his child actor moments on the 25th anniversary of Friends. He played Ross Geller’s adorable son Ben from seasons 6 to 8 on the show, and appeared in 24 episodes total.

As for Adam, his new film, Uncut Gems, in which he plays a charismatic jeweler and compulsive gambler, is slated to be a comedy hit. Uncut Gems hits theaters on Friday, December 13.

Related: Adam Sandler’s Kids: Everything To Know About The Comedy Icon’s Family