Fat Joe could’ve retired years ago and would’ve still been considered a legend in the rap game. But, he’s still at the top. And, it’s a testament to just how much of an imprint he has on the music industry that he’s been selling records since the early ’90s up until today.

Fat Joe, born Joseph Cartagena, is fresh off the release of his 11th studio album, Family Ties — which marks what will most likely be his last album, as the Bronx native plans to move more into producing, acting and his proudest role of them all, a father. Joe is joined by his friend of over a decade, super producer, Dre of Cool & Dre, who’s worked with him on the success of major hits including 2010’s “Make It Rain” featuring Lil Wayne.

Both Fat Joe and Dre joined us in studio to reflect on Joe’s illustrious career (as seen in the above video), which he credits to his music philosophy — “the marathon game.” Joe said it’s because of that very thought that Family Ties is his best album of his 26-year career.

“It really is though my best album yet because, to me, it’s always been a marathon, it’s always been about legacy,” Fat Joe said, recalling, “There were guys that were way better than me when I first started. But then, 10 years ago, I felt like I caught up to them. And I Was like, ‘Wait a minute, are these guys getting whack? Or am I getting better?’ And so I said, ‘All right, this is how I can get them.’ These are guys that I thought were Gods. And I said, ‘We going to play the longevity.’ The marathon game. So, we’re going to keep pumping out these hits for years and years.”

Family Ties took two whole years to create from start to finish, unlike Joe’s other albums, which he’s wrapped in a minimum of two-four months. “We took two years making this album. And man, we tweaked it, and tweaked it,” Joe said, noting that he drew comparisons to Dr. Dre‘s Chronic, with a bit of Kanye West‘s storytelling. 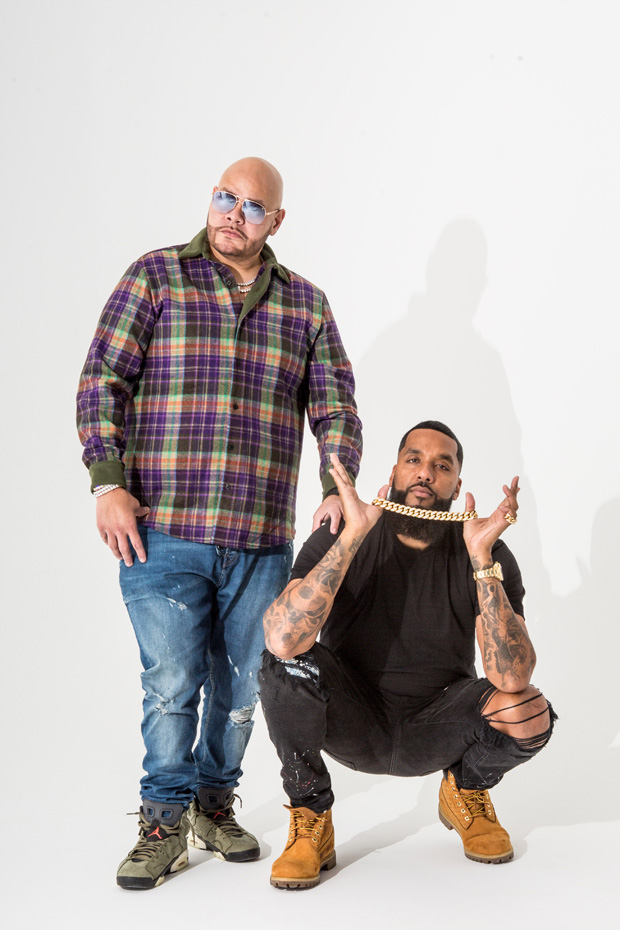 “I compare it to a modern day ‘Chronic’, to where songs would go into songs that lead into skits,” he said. “Eminem‘s going crazy on the album, and as soon as he goes crazy, you think it’s over, and then the chords come in and some other giant comes right behind him.”

Joe went on to explain how Kanye’s influence helped to tie all the tracks on the album together. “You’re going to hear how beat changes come, how different … it’s like a movie, man. I’ve never had an album sound like this,” he admitted. “Even down to the engineer, the mixer and the mastering. We spent a lot of money. That’s partially why I’m retiring. Because I went broke doing this album,” he joked.

For Dre, it was the motivation of Joe pushing him to tap into different creative areas that helped him make Family Ties unlike any other project he’s worked on. “I just want it to be a classic. And unfortunately, some of the greatest and the greatest of rap Gods, and legends, they all was hot at the beginning, and then their skills diminished,” Dre said. “With Fat Joe, I believe I’ve been getting better and better with time. And that’s the difference. — We just went for it together.”

Dre went on to explain that Family Ties has “a lot of basketball references,” especially on the track, “Been Through”. — A nod to the relationship between former Miami Heat teammates, Shaquille O’Neal and Dwyane Wade, who won a championship together in 2006.

As for the their thoughts about the track? — Dre confirmed, “They both heard it and they love it.”

Be sure to check out our exclusive video with Fat Joe and Dre (above), where they reminisce about Joe’s iconic career, before they dive into the details about the making of Family Ties. The new album also includes features from Cardi B, Bryson Tiller, Jeremih, Ty Dolla Sign, Anuel AA, and production from Boi-1da, Hitmaka and Cool & Dre.

One artist Joe wasn’t sure if he’d be able to lock down is none other than Cardi B, who’s closing out a record-breaking year in music after winning a Grammy for her debut album, Invasion of Privacy.

“That’s my girl, she goes hard,” Joe said of Cardi, noting that it was a bit hard to track her down. “We waited like eight, nine months for the feature. And, I believed that the song was a summer anthem… but we kept waiting for Cardi and then she did it, man,” he explained. “She is a beautiful person. And I love her story, man. I love what she stands for. I know how hard it was to come out the Bronx, myself. The obstacles and for her to do it as a female, and do it tastefully, I got to salute her, big time.”