It’s the moment we’ve all been waiting for — the American Idol finale! America narrowed it down to 3 amazing finalists Maddie Poppe, Caleb Lee Hutchinson, and Gabby Barrett. After incredible performances over the past season, it was time to announce a winner. But first, there were tons of other performances to get through!

Lionel Richie kicked off the finale in a blue sequined jacket to sing his hit “All Night Long.” He’s still got it after all these years! He had the crowd on their feet from start to finish. In the middle of the performance, he was joined by the top 10 finalists. They got to share the stage with a true legend! After the performance, Lionel hit the judges’ table with Katy Perry and Luke Bryan. “I think they’re all winners,” Katy said about the 3 finalists. She later noted, “It’s really up to them to make the most of this moment.”

Nick Jonas was the first celebrity to take the stage after Lionel. The hunk let his voice do the talking instead of his muscles. He started out his performance by singing his new single “Anywhere” with DJ Mustard. The performance segued into a sexy rendition of his hit “Jealous” alongside top 10 finalist Jurnee. Their chemistry onstage was straight fire! After the commercial break, Luke blessed us by performing his new song “Sunrise, Sunburn, Sunset.” But Luke wasn’t done. Gabby joined him for a gorgeous performance of “Most People Are Good.” It wouldn’t be the Idol finale without some Cade Foehner and Dennis Lorenzo! The top 10 finalists shared the stage with Grammy winner Gary Clark Jr. The trio performed Gary’s hit “Bright Lights.” Cade had one epic guitar solo during the performance. Honestly, we might never recover.

The Bachelorette star Becca Kufrin graced us with her presence ahead of her season’s premiere. She sizzled in a sexy, cleavage-baring red dress. Katy was mesmerized by Becca. and joked she wanted to be one of Becca’s suitors! The “Rise” singer couldn’t stop kissing Becca’s hand, and Luke eventually had to drag her behind the judges’ table! After that bizarre moment, top 3 finalist Maddie made our hearts melt with a sweet performance of “Rainbow Connection” with Kermit the Frog!

Darius Rucker and Caleb Lee Hutchinson brought all the country vibes with their performance of “Wagon Wheel.” They had me up and swaying to their sweet voices. Jimmy Kimmel randomly showed up to do a little comedy bit. The best part was definitely Sanjaya Malakar’s surprise appearance! The singer was on the sixth season of American Idol, and he’s grown up A LOT since he was on the show! Bebe Rexha performed alongside the top 3 finalist. They sang “Meant to Be,” which was very fitting considering the high-stakes finale!

Ryan then narrowed it down from the top 3 to the top 2. Caleb was the first to make it to the top 2. That meant either Gabby or Maddie would make it to the finals. When Ryan called out Maddie’s name as top 2 finalist, Gabby was noticeably upset. She had tears in her eyes as she walked offstage to her parents.

American Idol season 16 cutie Layla Spring performed “Blue” by LeAnn Rimes alongside her adorable sister, Dyxie. In yet another Idol finale surprise, LeAnn showed up to sing with the sisters! Katy and Catie Turner were up next and blew everyone away with their stripped down version of Katy’s chart-topper “Part of Me.” Their voices meshed together in perfect harmony. Katy is known for her high-octane performances, so it was a refreshing change to see her slow things down a bit. Michael J. Woodard teamed up with Yolanda Adams to sing “What the World Needs Now.” As usual, Michael killed it. Ada Vox brought the house down with singing legend Patti LaBelle. The dynamic duo performed an electric rendition of “Lady Marmalade.”

The biggest surprise of the night was definitely the moment Caleb announced to the world that he and Maddie are dating! They had been keeping this a secret his WHOLE TIME! The couple then sang a gorgeous rendition of “Somewhere Over the Rainbow.” Ryan surprised Caleb and Maddie with a vacation to Hawaii! Talk about a romantic getaway! 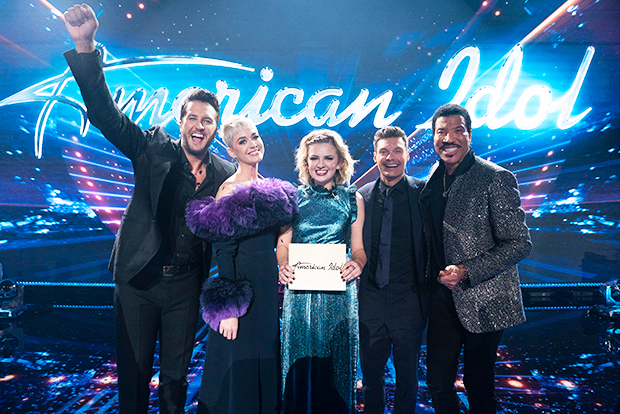 And then there were two. It was down to the new couple of the night. And the winner is: MADDIE POPPE! The singer burst into tears when Ryan announced her name. She performed her winner’s single “Going Going Gone” as the new American Idol champion with help from top 10!