Oh myyy! Christen Dominique, 30, and Laura Lee, 28, are both epic beauty goddesses that we’ve taken tons of makeup inspo from. However, they got down and dirty on Twitter on July 28, and fans can’t believe how quickly it escalated! It all started when Laura tweeted “sometimes I have to remember imitation is the most sincere form of flattery,” and followed up with “they watch they hate then they copy…” Fans were desperate to know who she was talking about, but Christen quickly outed herself as the object of her frustration. Click through the gallery above for the Twitter war, fan reactions, and pics of the bloggers!

“This AM I got a text from someone who stopped talking to me out of nowhere a while back. Not gonna stoop to this person level & enter drama,” she wrote. So what’s causing this outburst? Christen cleared that up, too. “Just because a thumbnail has a similar pic which others have done before them. Doesn’t mean the story inside is the same. Focus on yourself.” Fans speculate that the thumbnails and videos the girls are referring to are reactions to their first video ever. Laura posted her video months ago with a thumbnail of herself wiping away tears watching the nostalgic clip. Christen’s was posted on July 26, and had a very similar picture. To be fair, many YouTubers have done similar videos and thumbnails. Scroll down to see the comparison.

“Instead of creating positivity in the community there’s people trying to spread drama and bring someone down just to get to the top,” said Christen, angry that she’s being dragged into a public feud. “What we think say and do is a reflection of ourself, let’s start think saying and doing more positive things and we all will prosper.” Laura clearly wasn’t going to let Christen get the last word, and she tweeted “Christen Dominique you can just @ girl…don’t be shy.” Yikes!

Fans also think that the fact that Christen seemed to be teasing an upcoming makeup line in her newest video also contributed to the feud. Laura announced her own line just a week earlier, and judging by her many tweets and Instagrams about it, she’s very excited. However, Christen and Laura are certainly not the only beauty bloggers with their own makeup products. Desi Perkins and Katy Lustrelux recently revealed their collaboration, and Jaclyn Hill’s Morphe palette has been selling like hotcakes. Perhaps these girls have more of a personal vendetta since they actually live in the same building, but we’re still shocked to see how heated they got online!

Here are the thumbnails that caused the drama: 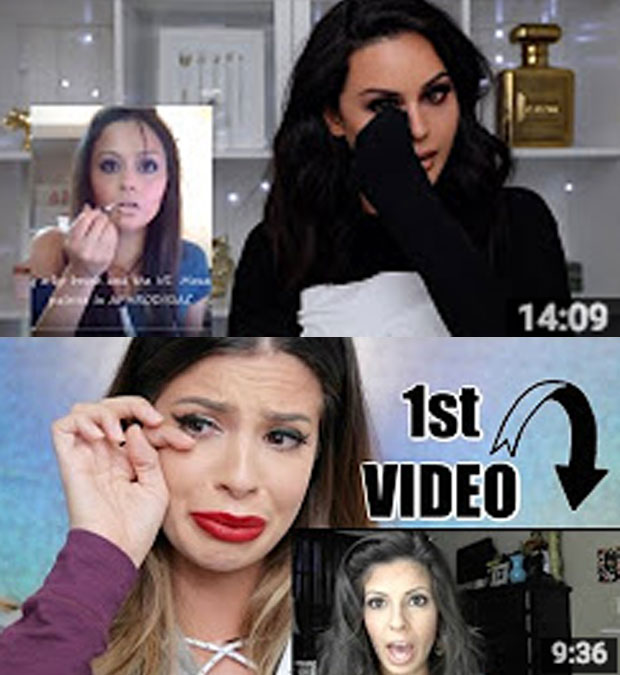 HollywoodLifers, whose side are you on in this battle of the beauty babes? Let us know!