Stefan and Caroline’s relationship wasn’t looking so hot this week. While she tried trusting him, having his ex hanging around in a towel didn’t really help out the situation, but Stefan was completely focused on getting Julian killed. Naturally, he tried doing it himself at a little family get together and that failed horribly. Julian almost killed him and Damon (Ian Somerhalder) but Lily saved her sons. In the meantime, Stefan realized how much he wanted children of his own.

There was also a Benzo moment at the party, because well, we have to eventually see how that relationship started. Enzo used her to make Lily jealous, and she played along for a flirty little minute and made us all swoon. Totally team Benzo. 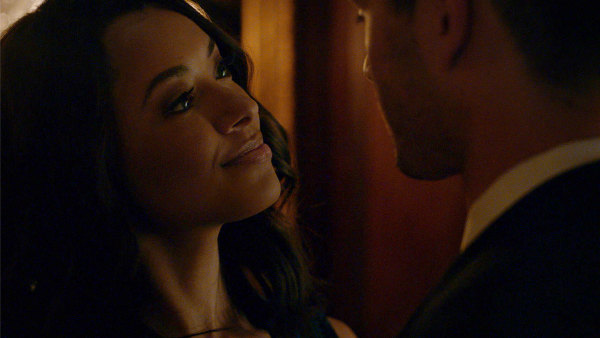 As for Alaric, he met Florence, the woman who was actually inside Jo’s body all along and was quickly fading. He stood by her side and said a reallllly heartbreaking goodbye that he never got to give his wife. Seriously, though, all the tears for Alaric. Luckily, he had Caroline there to help him… and Valerie. However, Valerie was just hanging out watching Jolaric’s wedding video when she noticed the chant happening after the explosion — a chant to save the Gemini twins. She was convinced they were still alive — so using Alaric’s blood and some spell, she tried to find them. And they all found out that yup, the babies were alive: inside Caroline’s stomach.

Speaking of Calaric (yeah that’s it for now), three years in the future, it’s him that she is engaged to. Yup, when Damon showed up at Alaric’s house, it was to see where Caroline is because Stefan is being hunted — and he knows that Caroline will be used for bate. And he’s right –they then they see her on TV hosting her segment, bleeding from what we can assume was the stake she was hit with. In the video she says she has “an urgent message for Stefan Salvatore.”

So, have you digested this episode yet? Caroline’s engaged to Alaric three years in the future, and she’s also carrying the Gemini twins in the future. Well, at least they don’t have to write in Candice’s bump! Stefan, you asked for a baby — well now your girlfriend’s got two in her belly.