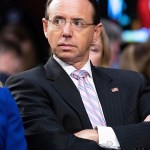 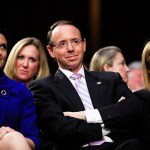 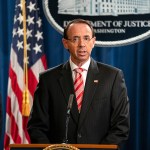 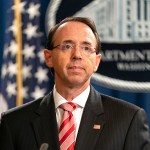 Deputy U.S. Attorney General Rod Rosenstein has strongly denied that he wanted to wear a wire to record conversations with Donald Trump. We’ve got five things to know about the veteran government official.

UPDATE 4/29/19: Deputy Attorney General Rod Rosenstein submitted his resignation letter to President Trump on April 29, 2019, which will become effective on May 11. It came just over a month after Robert Mueller delivered his final 448 page report on Russian collusion in Donald Trump‘s 2016 presidential campaign, which determined “While this report does not conclude that the President committed a crime, it also does not exonerate him.” Attorney General William Barr thanked Rod for his “dedication and distinction” while serving in the Justice Department.

Rosenstein wrote to Trump, “”I am grateful to you for the opportunity to serve; for the courtesy and humor you often display in our personal conversations; and for the goals you set in your inaugural address: patriotism, unity, safety, education and prosperity.”

President Donald Trump, 72, has a penchant for firing anyone who he thinks might be conspiring against him. That means trouble for Deputy U.S. Attorney General Rod Rosenstein. The New York Times reported on Sept. 21 that the 53-year-old considered wearing a wire when having conversations with Trump after he abruptly canned FBI Director James Comey. The publication also claims that he discussed invoking the 25th Amendment, which could remove a sitting president from office. We’ve got five things to know about Rod Rosenstein.

He released a statement that read, “The New York Times’ story is inaccurate and factually incorrect. I will not further comment on a story based on anonymous sources who are obviously biased against the Department and are advancing their own personal agenda. But let me be clear about this: Based on my personal dealings with the president, there is no basis to invoke the 25th Amendment.”

2. Rosenstein and the president attended the same business school.

Both are graduates of the University of Pennsylvania’s Wharton School of Business. Rod then went on to attend Harvard Law School.

3. Rosenstein is a family man.

His wife Lisa Barsoomian is an attorney who works for the National Institutes of Health. They have two teenage daughters. The family lives just outside Washington D.C. in the suburb of Bethesda, Maryland.

In May of 2017, Trump ordered Rosenstein and Attorney General Jeff Sessions to provide a written case for why he should be allowed to fire Director Comey. In his memo, Rosenstein was critical of Comey’s handling of the Hillary Clinton e-mail investigation and wrote that the FBI must have “a Director who understands the gravity of the mistakes and pledges never to repeat them.” Rosenstein later claimed that Comey knew he would be fired long before he authored the controversial memo that Trump used to can him.

5.  Rosenstein appointed former FBI Director Robert Mueller as special counsel to head up the investigation into any collusion between Russia and Trump’s 2016 presidential campaign.

After Sessions recused himself from the matter, Rosenstein named Mueller to head up the special investigation. Mueller’s probe has already secured guilty pleas from close Trump campaign aides such as Paul Manafort, George Papadopoulos and Michael Flynn on various charges including obstruction, conspiracy and making false statements.