Years before Brittney Griner was found guilty of drug charges in Russia, former Marine Paul Whelan, 52, was found guilty of espionage and has been behind bars in Russia. On Thursday, December 8, news broke that the WBNA star had been released in exchange for arms dealer Viktor Bout and was already on her way home to the U.S., per the Associated Press.

But amid the celebration of her freedom, cries of frustration arose from family and friends who have long hoped that Paul, who has been in Russia for almost four years, would also go free. Here’s what to know about him. 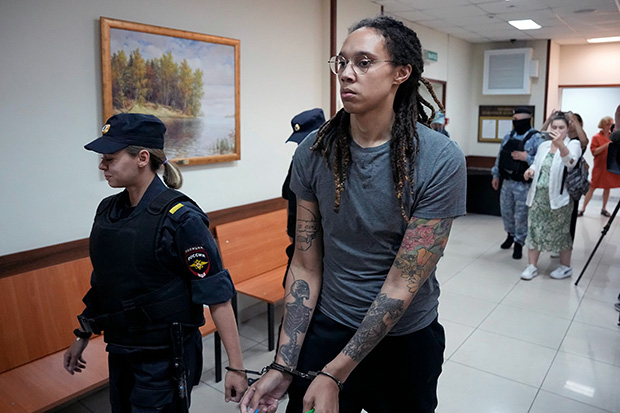 At the time of his arrest, Paul was the director of global security and investigations for an international auto parts manufacturer called BorgWarner. The company is based in Michigan. He also worked for a company called Kelly Services, also in Michigan, as an IT in global security

Paul has a twin brother named David Whelan, a sister named Elizabeth, and another brother named Andrew. They were partially raised in Michigan. Paul’s twin, for his part, has made himself available for interviews. Per NBC4 New York, David said in a statement that he is “so glad” for Brittney, but like Paul, is disappointed not to have his brother released. “The Biden Administration made the right decision to bring Ms. Griner home, and to make the deal that was possible, rather than waiting for one that wasn’t going to happen,” he said, noting that the White House reportedly gave the family advance notice of Brittney’s release.

And in a 2019 interview with the Detroit Free Press, David attempted to explain why Paul had so many passports. “It was as much probably a genealogical interest as much as anything,” he said. “It’s one of those things where it’s like, well, you start with two, so getting two additional ones doesn’t actually seem that peculiar.”

In an interview from the Russian penal colony where he is serving time, Paul expressed his frustration that he wasn’t freed along with Brittney. “I am greatly disappointed that more has not been done to secure my release, especially as the four-year anniversary of my arrest is coming up,” he told CNN of his December 28, 2018 arrest. “I was arrested for a crime that never occurred. I don’t understand why I’m still sitting here.”

According to CNN via PEOPLE, he further claimed he had been “led to believe that things were moving in the right direction.” He also thought that “something would happen fairly soon” regarding his imprisonment. Per NBC 4 New York, President Joe Bident said the U.S. will “never give up” on the fight to bring Paul home. “This was not a choice of which American to bring home,” he said, per the outlet. “Sadly, for totally illegitimate reasons, Russia is treating Paul’s case differently than Brittney’s.”

He could spend as many as 16 years in the Russian penal colony.

While he was initially detained in 2018, it was 2020 before Paul would be sentenced to a whopping 16 years in Russian prison for crimes the U.S. and Paul have said didn’t happen. The U.S. government has also classified him as “wrongfully detained,” per NBC4 New York. He was reportedly attending a wedding for a fellow Marine, to be held at the Hotel Metropol Moscow. The security director was apprehended in his hotel room after reportedly spending time with a Russian citizen and being handed a flash drive that had “classified” information he did not know was contained on the drive, according to his laywer.

Paul was born in Canada

While he is indelibly associated with the United States, Paul Whelan has citizenship in no fewer than four countries, per his official Wikipedia page. He was born in Ottowa, Canada, and his parents are British, with Irish heritage. Aside from his obvious U.S. citizenship, the former Marine also holds British, Irish, and Canadian citizenship. He’s also been known to travel extensively, and often to Russia.