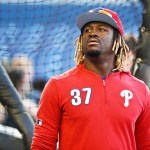 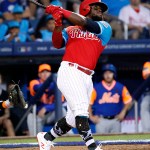 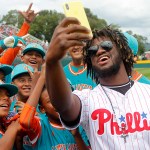 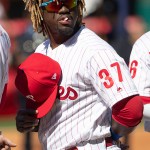 MLB star Odubel Herrera, a member of the Phillies, has been arrested on a charge of simple assault following a domestic incident in New Jersey. Here’s everything to know about the baseball player as he makes headlines.

Odubel Herrera, 27, a starting center fielder for the Philadelphia Phillies, has been arrested for a reported case of domestic violence. The alleged incident is said to have taken place in Atlantic City, New Jersey, and the MLB star has since been placed on administrative leave by Major League Baseball per the league’s domestic violence policy, reports ESPN. As the incident is investigated, he will be inactive for up to seven days per the MLB’s policy. Local police in Atlantic City were able to confirm that it was Odubel who was arrested, per an official statement posted to their social media page. “On May 27, 2019, at 8:33 pm, patrol officers responded to the Golden Nugget Hotel and Casino, located at 600 Huron Avenue, for a report of a domestic violence incident,” the statement read. “Officers arrived to find the victim, a 20 year old woman from Philadelphia, PA, speaking with security officers. The victim had visible signs of injury to her arms and neck that was sustained after being assaulted by her boyfriend, David Odubel Herrera, during a dispute,” the statement said. As the baseball star makes headlines for his arrest, here’s what you should know about him.

1.He’s originally from Zulia, Venezuela. He began his professional career in the Dominican Summer League, before moving to the U.S. While growing up, his father gave him the nickname of El Torito, or Little Bull.

2. He first played for the Texas Rangers. He was signed by the Rangers in 2008.

4. He has a daughter, Ana Paula. His Instagram page has several birthday dedications to her. In September of 2018, he wrote a sweet birthday post for her. In 2016, he shared an equally as heart-melting message. “Happy Birthday to my Lovely Daughter you are my main motivation, God Bless You!” he wrote.