Mary Mary is an urban contemporary gospel duo composed of Erica Campbell and Trecina Atkins-Campbell. The women, who are set to perform “Lift Every Voice and Sing” with LA Phil’s Youth Orchestra Los Angeles at Super Bowl LVI, have a lot of interesting and compelling history as well as aspirations for the future of gospel.

Find out more about this inspiring pair below!

The gospel duo was born Erica Monique Atkins and Trecina Evette Atkins to a large family of seven siblings in Inglewood, California. The sisters’ mother, Thomasina Atkins, was an evangelist and choir director at the Church of God in Christ while their father, Eddie A. Atkins, was also a member and youth counselor at that church.

Because of their proximity in age (Erica was born in 1972, Trecina 1974), the girls became closer between themselves than with the rest of their siblings, and, due to their parents’ place in the church, started to become involved in gospel music.

Their last names are ‘Campbell’ by coincidence

Yes, Erica and Tina both have the last name “Campbell,” which may confuse fans considering how they are biological sisters in the first place. Both women took their husband’s surnames, but their husbands are not related. Erica is married to record producer Warryn Campbell while Tina is married to musician Teddy Campbell, who was also a drummer for American Idol. Erica and Warryn have two children while Tina and Teddy have three kids. It looks like the sisters liked men with the same last name and who are in the same industry!

They’ve been in the music business since 1998

Mary Mary began their time in the music business officially in 1998 after meeting music producer (and Erica’s now-husband) Warryn Campbell, then launching a music career after a deal was reached with conglomerate EMI. They were initially performing for numerous movie soundtracks, like 1998’s Dr. Dolittle and The Prince of Egypt. As their gospel star began to rise, they were subsequently signed under Columbia Records and named themselves Mary Mary honoring Mary, the mother of Jesus and Mary Magdalene.

Related: Donna Kelce: 5 Things To Know About Travis & Jason’s Mom As They Face Each Other In Super Bowl

After various chart-topping albums in the 2000s, the duo have maintained their hold in the gospel industry while remaining true to what initially drew them to music. “I’m not a big fan of fluff-and-stuff music,” Erica added to the Los Angeles Times in 2015. “There are times for that, when you just want to affirm that you’re happy. But life is ups and downs, and sometimes you need something to help you feel like you’re not going crazy all by yourself.” 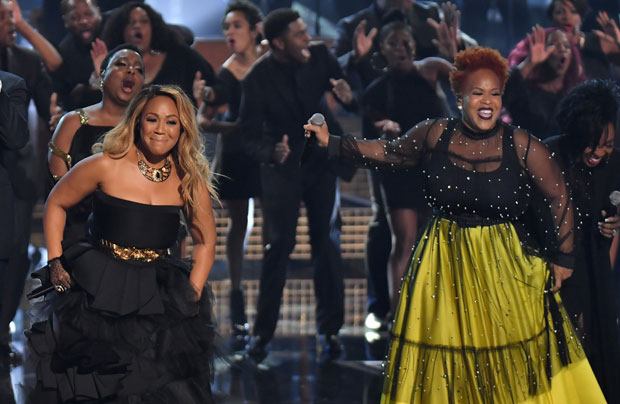 Erica and Tina have been nominated for eleven Grammy awards, winning four times including once for Best Gospel Performance and for Best Cotemporary Soul Gospel Album. The pair has also been nominated (and has won several awards) from the American Music Awards, BET Awards, Image Awards, NAACP Image Awards, and many more.

They had their own reality show & other solo projects

Beginning on March 29, 2012, the sisters premiered their own reality show, aptly titled Mary Mary, on WE TV. The show, which followed the sisters as they balanced their daily lives and music careers, had a solid run until Nov. 2, 2017.

Although the sisters have remained a solid pair, and will of course make an appearance on our TV screens for the Super Bowl, they have also ventured off into their own solo projects. In 2014, Erica released the solo album Help which went on to win the Best Gospel album at the 57th Annual Grammy Awards. She also released the follow-up album Help 2.0 in 2015. Tina then followed suit, releasing her own work It’s Personal in 2015 which coincided with the her memoir, I Need a Day to Pray, that same year.