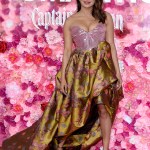 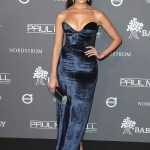 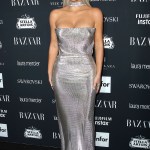 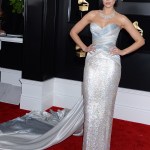 From Chrissy Teigen to Kim Kardashian, some of our favorite stars have rocked sexy strapless gowns, showing off their toned shoulders, arms and cleavage. See the best dresses below!

Strapless dresses will never go out of style, and some of the most famous names in Hollywood have been rocking the silhouette to perfection lately. Let’s take a look! Priyanka Chopra wore a cleavage-baring Vivienne Westwood at the Isn’t It Romantic premiere in L.A. on Feb. 11. She posed alongside her new husband Nick Jonas and looked amazing! Jourdann Dunn also rocked Vivienne Westwood, for the BAFTAs after party in London on Feb. 10.

Dua Lipa went strapless for the Grammys on Feb. 10. Before the official Grammy Awards, Bebe Rexha wore August Getty Atelier to the Clive Davis’ 2019 Pre-Grammy Gala at The Beverly Hilton on Feb. 9. Victoria’s Secret model Lais Ribeiro wore a busty Vitor Zerbinato to the amfAR Gala in New York on Feb. 6. At the same event, Victoria Justice wore a fitted mermaid Nedret Taciroglu gown. Delilah Belle was there, too, pretty in pink.

Saoirse Ronan wore a stunning pale pink Dior promoting Mary Queen of Scots in Edinburgh, UK on Jan. 14. Regina King wore one of our favorite dresses at the 2019 Golden Globes — a custom Alberta Ferretti. Host, model and designer Heidi Klum showed off her cleavage in a strapless Monique Lhuillier ball gown at the Globes.

Laura Harrier wore a pink strapless gown by Loewe at the SAG Awards in early 2019. Eva Longoria opted for a jumpsuit rather than a gown at the L’Oreal Paris Women of Worth celebration in December of 2018. Scarlett Johansson also wore pants and a corset top at the 2018 People’s Choice Awards. at the See more than 20 stars rocking gorgeous strapless gowns in the gallery attached above!