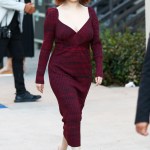 Selena Gomez’s birthday is today, July 22, so we decided to celebrate by rounding up her most stunning looks! See some of the singer’s sexiest outfits in honor of her 28th birthday!

Selena Gomez is another year older! The “Look At Her Now” singer turns 28 today, July 22, and we’re so excited to celebrate the singer completing another trip around the sun! To get into the celebratory spirit, we’ve rounded up some of Sel’s most stunning photos to mark the occasion!

At only 28, Selena’s accomplished plenty in her career. Having risen to fame at the age of 15 thanks to her starring role on the Disney Channel series Wizards of Waverly Place, the actress and singer has been in the public eye for well over a decade (and that’s not including her Barney & Friends days).

As Sel grew up in front of us, her fans were able to watch her evolve into the intelligent, beautiful, and successful woman she is today. From executive producing the Netflix series Thirteen Reasons Why to releasing numerous chart-topping hits like “Hands To Myself” and “It Ain’t Me,” there’s little that Sel can’t do if she sets her mind to it.

Thanks to these various projects, the actress has also shared tons of promo images and starred in her fair share of music videos. Plus, she’s been awarded and honored countless times throughout her career and in November 2019 was warmly welcomed back to the stage of the American Music Awards for the first time after an extended break. She was incredibly vulnerable singing her ballad “Lose You To Love Me,” before seamlessly segueing into “Look At Her Now.”

As we have seen Selena’s image mature, we’ve also watched her fashion sense evolve. While attending Billboard’s Women In Music event in 2017, where she accepted the honor of “Woman of the Year,” Selena pushed some fashion boundaries by sporting an edgy black top with leather pants that featured small cut-outs. It was certainly a departure from the floral Coach dresses she loves so much (and proudly wears as their brand ambassador). Her AMA’s look was truly eye-catching, wearing a lime green mini-dress for the red carpet.

The Wizards of Waverly Place alum has also mastered formalwear. She looked amazing at the premiere for The Dead Don’t Die in a Louis Vuitton crop top and maxi skirt set, as well as the premiere of Dolittle in January 2020. There are so many more memorable looks from Selena to see. So, head up to the gallery above to see more of this style queen’s hottest outfits of all time. Here’s to another year of Selena growing into the inspiring person —  and fashionista — her fans have come to adore.