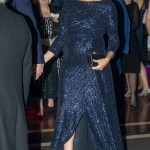 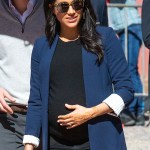 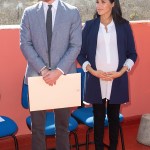 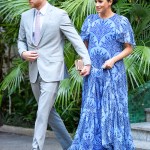 The royal baby is here — and it’s a boy! Meghan Markle may have been hinting at the baby’s sex throughout her entire pregnancy, too, as she’s worn PLENTY of blue looks over the last few months.

Meghan Markle gave birth to a healthy baby boy on May 6, 2019! The Duchess and her husband, Prince Harry, confirmed the little one’s birth on Instagram, and revealed the sex for the very first time. However, many fans think Meghan may have been subtly paying homage to her son in the months leading up to his birth by often wearing blue throughout her pregnancy. Although Meghan was photographed in pink ensembles every once in a while, too, darker, blue tones dominated her maternity fashion, and we rounded up all of the blue looks.

Just after announcing her pregnancy in October 2018, Meghan stepped out in a baby blue dress, which featured a high color and belted tie. Harry matched her by wearing a gray suit, along with a light grey tie that included some light blue undertones. When Meghan and Harry toured New Zealand in the fall, she wore a navy, high-low dress to visit the Auckland War Memorial Museum, as well. Her blue maternity looks were a mixture of light AND dark blues, and they all looked fabulous.

Before the royal baby’s birth, Meghan and Harry released a statement revealing that they would be keeping the little one private for the first few days after his birth. This is a different move than the tradition Prince William and Kate Middleton upheld after the birth of their three children — they debuted the babies right outside the hospital just hours after they were born.

Meanwhile, it’s unclear if Meghan’s blue outfits were purposely meant to hint at the sex of her baby, but there were certainly a number of great blue looks for us to look back on. Click through the gallery above to check ’em all out!