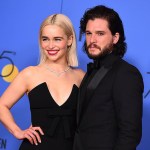 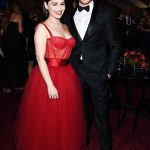 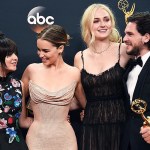 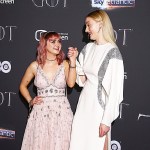 Can you believe it’s time to say goodbye to Game of Thrones? The show’s series finale will air May 19 after 8 seasons of game-changing moments. The Game of Thrones cast is massive and many of the cast members have become lifelong friends since embarking on this incredible journey in 2011. The cast has become like family. The cast has worked together on the show for years, so it’s no surprise that they’re all close.

For Kit Harington, 32, and Rose Leslie, 32, they even found love on the show! Kit has played Jon Snow since day one and Rose joined the show in season 2 as Ygritte. As Jon Snow and Ygritte fell in love, so did Kit and Rose. They dated for years before getting married in 2018. Jon Snow may know nothing, but Kit knew he’d found “the one” in Rose.

One of Kit’s best friends from the show is Emilia Clarke, 32. Their characters didn’t meet until season 7, but they’ve crossed paths at so many Game of Thrones-related events and have become best pals. They’re always goofing around on the red carpet and on set. Even though Jon Snow and Daenerys are destined for heartbreak, Kit and Emilia’s friendship is forever.

You can’t talk about the Game of Thrones cast without talking about Maisie Williams, 22, and Sophie Turner, 23. They’ve been best friends since day one. Maisie and Sophie have been there for each other for the past decade. Their bond is unmatched, much like Arya and Sansa’s relationship. They even got matching “07.08.09” tattoos to commemorate when they were cast as the Stark sisters. Maisie is set to be one a maid of honor in Sophie’s upcoming summer wedding to Joe Jonas, 29.