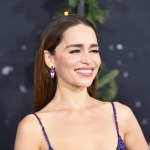 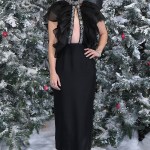 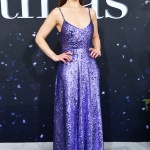 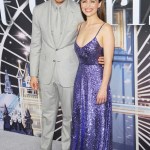 Ahead of the Nov. 8 release of her new movie ‘Last Christmas,’ Emilia Clarke made a number of press stops to promote the film — and she looked incredible each and every time!

Emilia Clarke stars alongside Henry Golding in the new movie, Last Christmas, in theaters Nov. 8, and she’s looked like an absolute STAR while promoting the film over the last several weeks. The film’s New York City premiere took place on Oct. 29, and Emilia looked beyond radiant in a sparkling blue-hued dress for the occasion. The sequined ensemble was perfect for an event in honor of the holiday-themed movie. The actress completed her look with her hair parted down the middle and swept behind her shoulders, along with a pop of stunning red lipstick.

She also attended a photocall for the film in German on Oct. 22, where she wore a light blue jumpsuit, which featured long sleeves and an off the shoulder neckline. The belted look came down to Emilia’s calves, and she wore pointy-toed, nude heels to complete the ensemble. The very next day, she attended the movie’s Paris premiere in a chic, neutral-toned dress, with a matching coat draped over her shoulders for when she went outside. She greeted dozens of fans at the premiere, and had a huge smile on her face the whole time!

For her appearance on Good Morning America on Oct. 30, Emilia wore a white dress with plunging neckline and black belt around her midsection. She was photographed arriving to the show’s NYC studio with a jacket around her shoulders, and she looked absolutely gorgeous.

In Last Christmas, Emilia plays Kate, a woman who notoriously has bad luck until she meets Tom — Henry Golding’s character — while working as an ‘elf’ in a year-round Christmas store. The movie also stars Emma Thompson, Michelle Yeoh, Patti LuPone and more.